Sex usually sells, particularly when you’re looking to attract geek fanboys. And it’s especially alluring when you’re talking about a bare-breasted Angelina Jolie slinking around with nothing to keep her warm except a long serpent’s tail, which is what her “Grendel’s mother” character does in the red-band trailer for Robert Zemeckis‘s Beowulf (Paramount, 11.16). And so there are bus-stop ads currently emphasizing this. 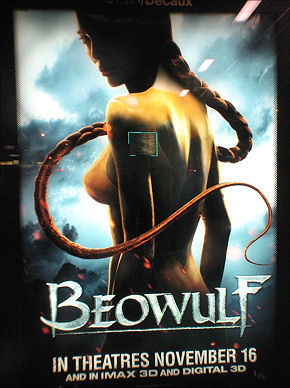 But if you look closely you’ll notice that Jolie is wearing some kind of yellow digital body-suit over her left breast. (With a sharp clean line, as if she’s wearing an Olympic bathing suit.) I realize she’s adorned in some kind of gold body paint in the film, but the image in the red-band trailer is…I don’t know, more anatomically life-like or something. Something to do with that dripping-wet-bod effect.

The yellow breast-covering adheres, obviously, to Paramount’s intention to release the film with a PG-13 rating. But I think it’s odd to send out conflicting messages. Come see Angelina’s exposed boobs, the poster is basically saying, only they’re not really exposed because we need the family trade also. Implies one thing, does another.