I did a phone interview last week with Control director Anton Corbijn. I’m not going to describe our chat except to call it easy from start to finish. Nothing remarkable in that, but pleasant all the same. 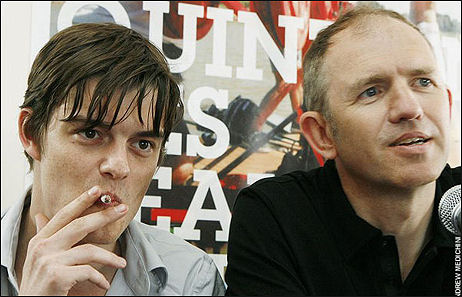 I didn’t mention a nagging thought to Corbijn, which is that a film as fine and top-notch as Control — the toast of ’07 Cannes Film Festival, one of the finest rock-music dramas ever made, easily one of the most beautiful black-and-white films of the last 40-plus years — is somehow diminished by opening in a couple of piddly-ass theatres in New York and Los Angeles. This is a film that demands crowds, noise, kleig lights, after-parties.

I’m especialy deflated that it’s debuting here at the Nuart, a place that always manage to diminish the impact of a film due to its small screen and cavern-like shape. Perhaps it’ll be shifted to the Landmark megaplex after the first week.

A naitve of Strijen, a town in southern Holland, Corbijn’s primary rep is that of a rock band photographer. He began his photography career in the mid ’70s before gradually moving into music videos in the early ’90s and then, two years ago, feature directing with Control, which I’ve now seen three times and which seems to improve with each viewing.

Corbijn’s visual style is defined on his Wikipedia page as follows: “Corbijn tends to favor a rawer look, often in black-and-white. His subjects appear to be calm and far removed from everyday life. His photographs show raw emotion. His influential style of black-and-white imagery with stark contrasts on grainy film (sometimes referred to as ‘overcooked’) has been imitated and copied in such extent that it has become a rock clichÃƒÂ© and a vital part of the visual language in the 1990s.” This, visually, is pretty much what you get when you watch Control.

I began by asking Corbijn whether any color shots had been taken during the shooting of Control, and he said nope. The monochromatic palette of the film is so dominating that I found myself wanting, perversely, a kind of aesthetic counterbalance to wade into.

Here’s the British website for Control (it’s stunning how the Weinstein Co. refuses to create websites for its releases) and the mp3 of our discussion. Watch the trailer if you haven’t seen it. Corbijn says he definitely intends to make another film, which of course is good news.