An 11.17 Hollywood Reporter piece by Gail Schiller went up yesterday about the blanket refusal of most American moviegoers to patronize any film vaguely related to 9/11 or the Middle East conflict. Even a first-rate whodunit procedural like In The Valley of Elah, highlighted by superb performances and set entirely in Tennessee and New Mexico….even that got the bum’s rush. 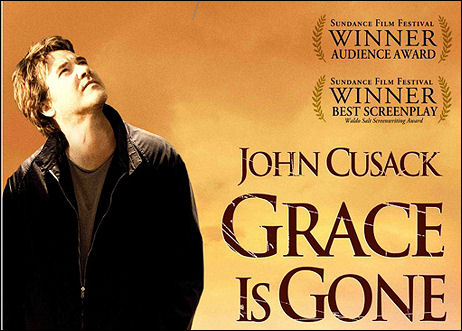 Will audiences regard Grace is Gone (Weinstein Co., 12.5) as a sand movie in sheep’s clothing?

The “leave us aloners” (no sand, no dark-eyed characters of any Middle Eastern heritage…we just want to be entertained) are, of course, the same group who wouldn’t see United 93 (i.e., the “too sooners”) last year.

“One of the biggest challenges beyond the topicality of these different [Middle East] movies is their sheer number,” New Line marketing chief Chris Carlisle told Schiller. “It becomes a muddle for the consumer.”

That’s a polite way of putting it. Allow me to put it more bluntly. To a one-track mind looking to avoid even a hint of darkness or complexity, a folded newspaper is a muddle. 90% of the American moviegoing public goes to movies in order to find a cinematic quaalude — a film that will give them a kind of fluttery high and make them go “aaah.” If a movie seems to be offering anything other than some form of positive primal experience (i.e., something that offers big laughs or thrills or which affirms basic yearnings or values), it’s got problems.

“Rendition is very different,” Carlisle explains. “Despite its Middle East backdrop, it doesn’t take place in Iraq. We played up our cast and the thriller aspects of the story line. This film is an engaging, entertaining and emotional story, and that’s where we focused our campaign.” Forget it, Chris. The “leave us aloners” are like deer in the forest picking up the scent of humans in hunting jackets. They can smell a terrorist flick a mile away, and they don’t want to know from distinctions.

We are smack dab in the Age of the Mass-Market Ostrich.

Brian De Palma‘s Redacted (Magnolia, 11.16) is facing a double whammy — it’s a sand movie with some of the most amateurishly awful performances in the history of commercial cinema.

Will the “leave us aloners” blow off the Weinstein Co.’s Grace is Gone also? Do deer tend to hightail it when they hear the crack of twigs 500 yards off? This is a touching Middle American family drama about dealing with grief, plain and simple. It uses spare brushstrokes to tell a spare story. The great John Cusack plays a Bush-supporting dad who finds it next to impossible to tell his two daughters that their soldier mother has been killed in Iraq. The Weinsteiners moved the release date from 10.5 to 12.7, hoping this might make a difference.

“Any time you deal with the current war situation anywhere in the Middle East, you risk U.S. audiences just glazing over,” Picturehouse president Bob Berney told Schiller. “They look at movies as an escape and they want to be entertained.”