The #1 rule of director-actress relationships is simple. If a film they make together fails at the box-office (or if one they’d like to make fails to get financed), the relationship will start to to disassemble sooner or later. It’s like a couple giving birth to a child with a debilitating lifelong ailment. 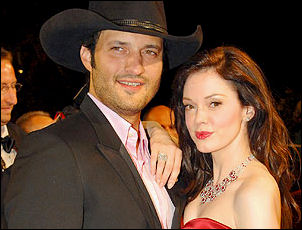 Case in point: the relationship between slovenly downmarket B-movie director Robert Rodriguez and his actress-fiance Rose McGowan is probably in some kind of jeopardy because Universal has backed out of financing their costly Barbarella project because they don’t believe McGowan has enough star power to justify the film’s $100 million budget.

In short, the studio has not only nixed a deal, they’ve also squeezed a drop of poison into the conjugal well.

McGowan has always struck me as a descendent of Mary Astor‘s character, Brigid O’Shaughnessy, in John Huston‘s The Maltese Falcon. As Caspar Gutman (Sydney Greenstreet) says to Sam Spade (Humphrey Bogart)…well, such thoughts are best whispered.

The proposed Rodriguez-McGowan Barbarella flick, like the 1968 Jane Fonda-Roger Vadim original, is about a futuristic intergalatic hottie getting into Star Wars-ian intrigues and adventures. New York Observer writer Spencer Morgan wrote yesterday that actress considered for the part — before Rodriguez insisted that McGowan be cast, that is — have included Nicole Kidman, Halle Berry and Jessica Alba.

“It’s ort of embarrassing for everyone involved,” a source has told Morgan. “No one thinks Rose can carry the movie, but Robert won’t listen.”