I have an explanation as to why Jerry Seinfeld‘s Bee Movie (Dreamamount, 11.2) isn’t all that good or funny, and another about why it simply doesn’t work. The answer to the second question is that deep down it’s a movie about death waiting just around the corner, which is obviously a depressing thought for most of us. But that’s a thematic issue that can wait. 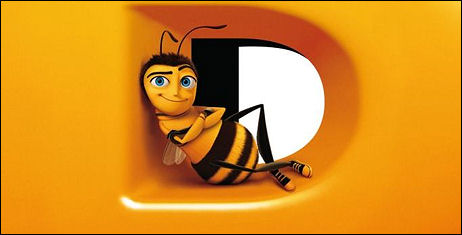 The main problem with Bee Movie is the system under which it was made, which is to say the political conditions. The movie is so Seinfeld-y that it’s clear that the men and women who helped this enormously wealthy and super-famous comedian make the movie indulged in too much kowtowing and boot-licking. They did the “right thing” politically, and they made a bad film as a result.

Writing a good screenplay — including an animated fantasy-comedy aimed at the easy-lay family crowd — is a very difficult thing to do. You can’t just “attitude” your way through it, and you can’t just throw material at the wall and use whatever sticks. You have to create an imaginary, spherical, super-detailed world that a typical audience is willing to believe in on its own terms. You need to create a world with rules that make basic sense.

The Bee Movie problem is that Seinfeld — the producer, co-writer and star, and therefore the dominant Big Kahuna — never did any serious undercurrent work on the script. (Which, when done properly, conveys the “things that are there but aren’t said” element that all good films have.) The evidence suggests that Seinfeld and co-directors Simon J. Smith and Steve Hickner and the various co-writers (Spike Feresten, Barry Marder, Andy Robin, Chuck Martin, Tom Papajust) just sat around and cooked up two or three hundred clever lines and jokes and said, “We don’t need to get too deep here…this is just a family movie and we’re trying to have fun and entertain.” 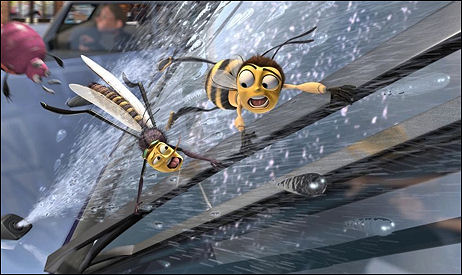 Wrong mentality! A good comedy is a murderously hard thing to get right. You have to approach it the way Anton Chekhov approached the writing of The Cherry Orchard. Ask Billy Wilder, ask Preston Sturges…you can’t just goof your way through it.

It seems as if one of the basic ideas was “this is Jerry’s movie, so nobody stand in the way of his humor flow.” Apparently that meant not matching him up with a Brad Bird-level director — a sharp taskmaster who knows what a tough job it is to make a script really work, and would have stood up to Seinfeld every so often and said, “Uhhn, Jerry? This isn’t working. This is a Laugh Factory act, not a movie.” Instead, everyone from Jeffrey Katzenberg on down just stood back and said, “Whatever Jerry wants…!”

Eric Darnell and Tim Johnson‘s Antz (’99) was silly and comical, of course, but the ant world it created for itself had a certain recognizable logic and rhyme and symmetry. But no one did any heavy lifting on Bee Movie. None of it means anything or goes anywhere or digs into anything solid. The result isn’t a “bomb” — Bee Movie going to make lots of money this weekend — as much as a so-whatter. 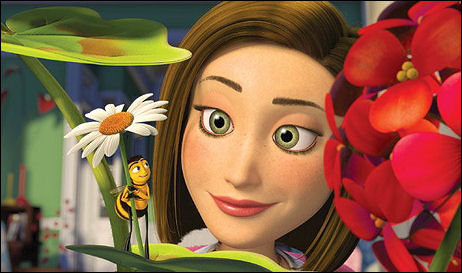 Nobody laughed very much at last night’s all-media screening. They tittered, chuckled and guffawed here and there….but no haw-haws and no shrieks. And no emotional currents whatsoever. Seinfeld’s quirky-peculiar humor is all through it, of course, and that gives it an amiable personality and all, but the movie has no theme, no bones, no arc and no soul. It’s a Bee Movie about next to nothing.

All it says is that bees shouldn’t involve themselves in litigation against honey companies or worry in general about ownership or worker exploitation or any of those business-labor issues that concern human attorneys. It says that bees should be just be busy, and that they should be content with that.

One of the big Bee Movie problems was a decision not to worry about the believability of inter-species communication through the English language. I didn’t believe it last night and I don’t believe it now. (And I don’t care if Ratatouile had the gourmet rat speak English — I didn’t like that either.) It’s not an agreeably silly idea — it’s seriously moronic. Nor do I believe that the courts would allow a bee to sue the honey companies for stealing honey from bee colonies. Nor do I believe that bees the world over would decide to kick back and become slackers because Barry has been victorious in his lawsuit and therefore forced the honey companies to return all the honey to the hives. Nor do I believe that thousand of bees could lift up the wings of a jumbo jet and help it land at a major New York airport. 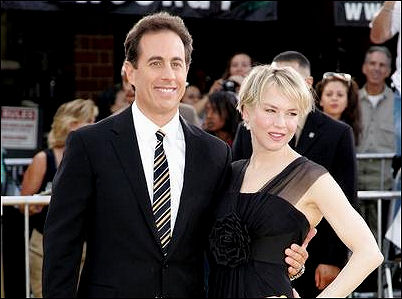 I know what you’re thinking — lighten the fuck up, it’s a cartoon movie about bees! But movies like this don’t work unless you can say to yourself, “Yeah, I can roll with that.” I have no problems with a deer being able to talk to a skunk and a rabbit. I have no difficulty with members of an ant colony sounding and reasoning like Woody Allen and Sylvester Stallone. But I had huge issues with almost every story element in Bee Movie.

There’s a deeper, more fundamental reason why this thing doesn’t work, though. Seinfeld riffs about everything in the bee world except one huge thing — the fact that worker bees (like his own character, Barry B. Benson) have an average life span of nine to twelve months. Bee Movie is therefore about a character who’ll be shaking hands with the grim reaper fairly soon. It’s The Bucket List without Jack Nicholson or Morgan Freeman acknowledging their cancer. It’s Edmond O’Brien in D.O.A. without his knowing he’s been poisoned. How can anyone identify with a bee who’s going to be dead by next August?