It’s a law of nature that even the best-liked producers with the finest taste buds have to make an occasional stinker. Nobody bats .1000. The law of nature, averages, expediency…one of those. And so Working Title co-chiefs Tim Bevan and Eric Fellner have produced Elizabeth: The Golden Age, Love Actually, Bridget Jones: The Edge of Reason, Smokin’ Aces, Chicago Joe and the Showgirl and two or three other clunkers. 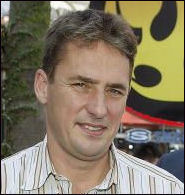 But for a couple of guys who’ve been been a hot team for 22 or 23 years and have made close to 100 films since the Ronald Reagan era, a mere seven or eight duds in all that time is an amazing record. Seriously.

It is therefore allowable that Variety‘s Anne Thompson has written a kiss-blowing, laundry-list profile of these guys. Every now and then the subjects of these trade- magazine pieces actually merit the gymnastic kowtowing.

Especially with Joe Wright‘s Atonement, which Bevan and Fellner produced, being a more-than-likely Best Picture contender. And with well-scripted films like Paul Greengrass‘s Imperial Life in the Emerald City, the Coen Bros.’ Burn After Reading, Ron Howard‘s Frost/Nixon, Kevin McDonald‘s State of Play and Beeban Kidron‘s Hippie Hippie Shake coming down the pike.

All that said, there’s a very small part of me that can never forgive and will never forgive Bevan and Fellner for producing Love Actually. 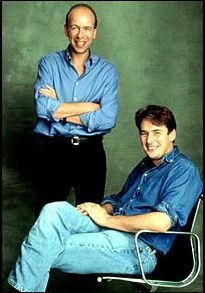