“Keeping your BlackBerry on isn’t just acceptable, it’s a life-affirming action,” Nicole LaPorte declared in a 10.14 L.A. Times piece about industry cell-phone status, etiquette, penetration. “To turn off your BlackBerry is to be dead,” she says. Which means, of course, that notions of biological, genetic or spiritual identity are passe. In short, “you are your phone.” 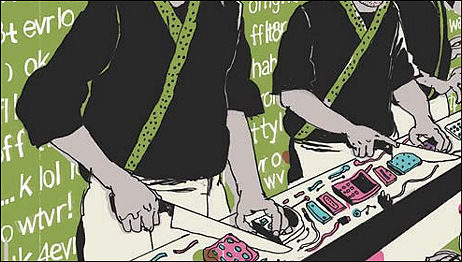 If it’s a bare-bones model with no e-mail capacities, you’re an embarassment…a Luddite. If it’s BlackBerry Curve, “you’re someone who lives in the moment and ‘gets’ it, as opposed to those still stuck with the BlackBerry 8700,” LaPorte says. “Treo (any model)? You’re an amateur, I’m afraid, not to mention living in 2006. IPhone? An artiste with vision, as long as you weren’t suckered into buying it at $599. BlackBerry 8830 World carrier? See you in Cannes!”

I went looking on Craig’s List last week for somebody who could fix it so I can access my Verizon account with an iPhone, instead of having to start up a whole new account with ATT/Cingular. There are hackers out there who do this for a fee, but nobody responded. When are the iPhone techies going to open up their device to other carriers? And when is the iPhone 2.0 model coming out?