This, according to a Mammoth Advertising announcement, is the official one-sheet for Julian Schnabel‘s The Diving Bell and the Butterfly (Miramax, 11.30). You’ll have to search long and hard to find a poster that misrepresents the content of a film more flagrantly. That said, I would probably try something like this if I were in charge of Miramax ads. They can’t sell what the film actually is. Like Diving Bell‘s main character, they have no choice but to dream and fantasize. 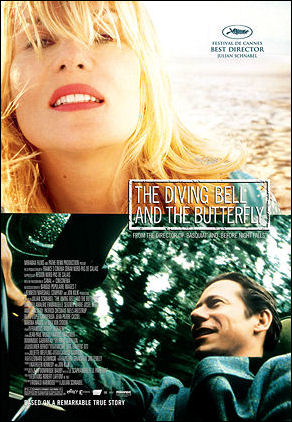 Despite Schnabel’s rich imagination and a masterful technique, despite Diving Bell‘s longings, passions and immaculate compositions, this is a landmark bummer film — a movie about being paralyzed for life and having nowhere to go or nothing to do except blink your left eyelid.

Give me a loaded .45, please. Take it off safety, place it under my chin and pull the trigger. Sorry for the mess but thank you. Now I can be with the angels.

Schnabel’s sad, bittersweet drama deserves respect. Those who have praised it are not wrong, although I can’t for the life of me understand how anyone could recommend it to a friend without saying, “It’s really great — you get to experience what it’s like to be totally paralyzed for two hours. Naturally, this leads into all sorts of observations about the things that make life joyful, delightful, eternal…worth cherishing. You do have to sit in that French guy’s body for two hours, though. You need to understand that. Clearly.”

It is the lamentable but necessary task of Miramax marketers to obscure this aspect of the film. I don’t blame them for trying. And I hope that people who, unlike myself, have the spiritual constitution to watch Schnabel’s film and truly enjoy it without suffering from a claustrophobic panic attack will check it out. I’m in the minority here, after all. 76% of the Rotten Tomatoes gang has gone for it hook, line and sinker.