I was speaking a little while ago to Michael Clayton director Tony Gilroy, and we got into the subject of actors speaking English with foreign accents in movies set in foreign-speaking countries. We agreed on two things: (1) It’s entirely the right thing for Benicio del Toro and his costars tp speak Spanish in the two Che Guevara films (The Argentine and Guerilla) for director Steven Soderbergh but (2) Tom Cruise and his mostly British costars speaking with a German accents in Bryan Singer‘s Valkyrie might be a problem. 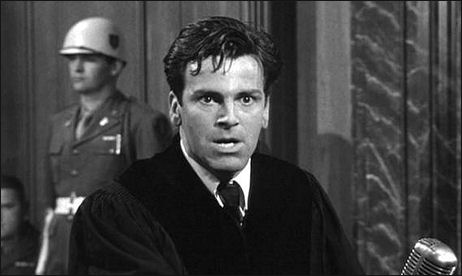 Maximilian Schell in Judgment at Nuremberg

It might be difficult also if the Valkyrie Germans speak a plain, unaffected mid-Atlantic accent, and it may be okay — I’m not sure. But Cruise trying to sound like Walter Slezak in Lifeboat would be a huge speed-bump. 50 years ago audiences accepted Marlon Brando, May Britt, Parley Baer and Maximillian Schell speaking with German-accented English in Edward Dmytryk‘s The Young Lions, but that belief system may not work any more. Right now I’m hearing Cruise’s voice going through the Brando/Young Lions paces, and I’m going “uh-oh.”

Singer, I think, will have to begin Valkyrie with everyone speaking actual German and then do a sudden Stanley Kramer switch. I’m referring to an early courtroom scene in Kramer’s Judgment at Nuremberg (’61) when the camera zooms in on the German-speaking Schell — a kind of visual announcement to the audience that the film is suddenly shifting gears — and then wham, Schell is speaking English. It works perfectly.