I paid money to see Robert Benton‘s Feast of Love last night. It’s a completely decent second-tier relationship drama. That doesn’t mean “second-rate” — it’s just not refined enough to be called top of the line. A little too schematic, not enough of an underflow. Maybe it is second rate, but I half-liked it. I was half into it and sometimes fully engrossed, and also a bit bored from time to time, but it didn’t hurt altogether. 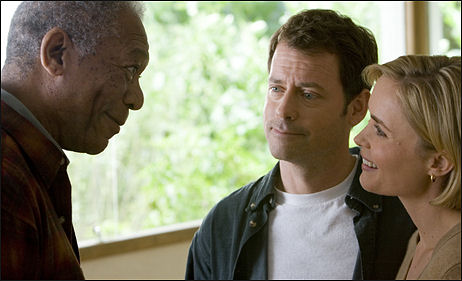 I respected Gregg Kinnear‘s willingness to go into vulnerable places, and the growing intimation that you get from Allison Burke‘s screenplay (based on Charles Baxter‘s book) that the sad/bad stuff might happen at any time. Radha Mitchell delivers as a conflicted real-estate agent who brings fresh misery into Kinnear’s already cloudy life, and hats off to Benton for not shying away from matter-of-fact nudity during the numerous bedroom scenes.

And I really liked Billy Burke‘s acting as Mitchell’s married boyfriend. Burke is mainly a TV actor but he deserves more. He knows how to deliver lines like they’re coming from someone (and some place) genuine, and he has a kind of primal Steve McQueen-ish thing going on.

But I absolutely despised a moment early on when Morgan Freeman‘s charac- ter, a 60ish teacher struggling with the death of his 20-something son from a heroin overdose a year earlier, wakes up in the middle of the night and goes for a stroll. He walks by a vacant baseball field and suddenly sees and hears a softball game in progress — one he’s remembering, presumably. (We all understand scenes like this. Most of us, I mean.) Then all of a sudden it’s daylight and people are everywhere and Kinnear comes up to Freeman and starts chatting.

It’s a beautiful transition at first — Freeman might be remembering a conversation he had with Kinnear, or it might be an imaginary chat that he’s having in his head. It doesn’t matter either way because we’re “there” with Freeman — he inspires trust and comfort no matter who or what he’s playing — and cool with whatever goes down.

But two seconds after Kinnear greets Freeman Benton throws in a title card that says “six months earlier” and the moment is shattered all to hell. Who gives a shit if it’s six months earlier or the next morning or the day before or six months hence? We’ll figure it out as we go along, no? Nope. Some idiot producer (or perhaps some idiots who were asked about this scene following a research screening) confessed to confusion about the dark-to-daylight element (whoa!) and Benton lost his nerve and put in the title card.

Kowtowing to the dumbest people in the audience will always be a mark of mediocrity, and I lost a lot of respect or Benton at this very moment. A stronger director wouldn’t have done this.

Imagine a producer coming up to David Lean during post-production on Lawrence of Arabia and going, “Uhhh, David? I’m not really getting the thing with Peter O’Toole blowing out the match and a split second later we’re watching a sunrise in the desert. He’s standing in Claude Rains‘ office when he blows it out, right? I’m not getting how he’s suddenly hundreds of miles away in a different country… it’s a little disorienting. You need to put in a title card that says, ‘Arabian desert — Three Weeks Later.’ People will be less confused this way.”