Financial action in the film business

In David Carr‘s 10.11 N.Y. Times piece about today’s absurdly overcrowded movie marketplace, Sony Classics co-president Tom Bernard speculates on the motives of new-to-the-business investors. “Hey, if you’ve made all of your money in corn futures and manage a hedge fund, why not gamble a bit in the movie business?” he says. 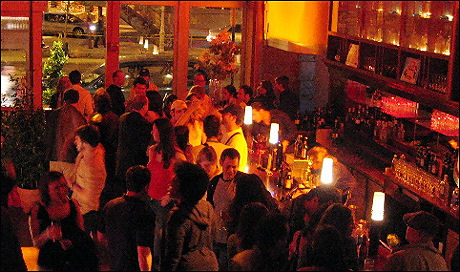 “I’d say that there is real money to be made by being the guy that collects and holds all of this money, the theater owner,” Bernard adds, “but I don’t see a bunch of Wall Street money heading into that. Nobody wants to show movies; they want to make them.”

There are two reasons why investors put their money into making and not showing. One is the marginal but tangible benefits of meeting famous people and occasionally hanging with legendary, world-renowned creatives (at lunch or business meetings, or at least at parties). Not just social but also spiritual benefits. The other, which feeds to some extent off the first, is the access that film investors sometimes have in these circles to educated, breathtaking women with immaculate genes and refined breeding.

As Tom Wolfe pointed out in The Painted Word, which looked at the tendency of the super-rich to purchase modern art and, in some cases, develop relationships with artists, nothing matters as much to people with money as the notion that people whose place in history is assured because of their fame or their artistry regard them as a member of the club, or at least as members with honorary status.

To say that a significant portion of today’s hedge-fund multi-millionaires lack grace and refinement is putting it very, very mildly. Such people naturally crave (and in some cases are desperate for) the assurances and status-upgrades that only famous artist elites can bestow.

Creative X-factor women with beautiful exotic looks are usually bored by corn-future investor types, but their cousins — beautiful elegant women who haven’t much edge or talent, or are too lazy to develop what they have — will sometimes entertain overtures from dull guys if they’re rich enough. You never know where things can lead. The key thing is access, and these investor types, in their dreams, live for the chance at meeting and then, given the right vibe and circumstance, pitching these women.

I swear to God that 90% of the financial action in the movie business happens because of these two things.