Update: No one has yet seen Charlie Wilson’s War, but the Gurus of Gold consensus so far is that Julia Roberts is a prime Best Supporting Actress contender. The Gurus are voting this way for the usual reasons — i.e., to show obeisance before the power of Roberts’ legend and the economic power of Universal Pictures. (Note: I erred earlier today in thinking that Variety‘s Anne Thompson had herself decided that Roberts in a likely contender in this category. She was in fact quoting from the Gurus of Gold list.) 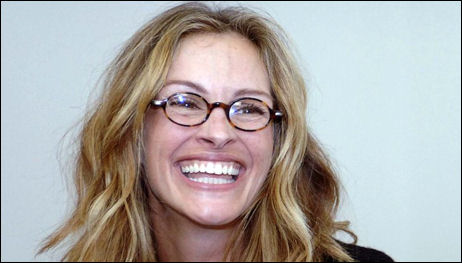 The bottom-line is that I’ve read an ’06 draft of Aaron Sorkin‘s script of Charlie Wilson’s War and Roberts’ role — she plays Joanne Herring, a real-life Houston multi-millionaire — is fairly small. Sorkin and director Mke Nichols might have enlarged the part since, but it was almost cameo-level on the page.

On top of which the trailer suggests that Roberts’ performance is mainly about that not-quite-right Texas accent and selling that openly scheming, anti-Communist, sexually-provocative routine with Hanks as they discuss finding a way to help Afghanistan’s Muhjadeen resistance fight the Soviet invaders. Buttressed, of course, by that problematic blonde coiffure favored by conservative Houston ladies of a certain age.

So forget it, okay? Not enough screen time, no dimension to the role, limited acting chops, big hair = not in the game.