James Franco delivered a landmark performance as James Dean in a Mark Rydell-directed TV movie six years ago, and without dismissing his subsequent work in any way (I’m a fan of his performance in ’03’s City by the Sea and his small but solid performance in In The Valley of Elah, which should have been larger) this is what I mainly think of when I see or run into Franco. 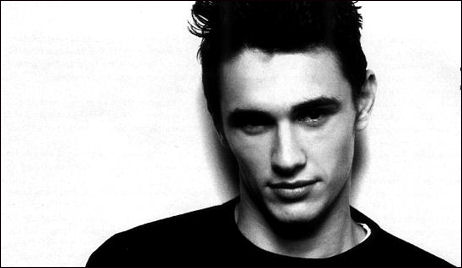 A performance he gave six years ago…right. Like those Woody Allen fans who say to him in Stardust Memories, “We love your movies, especially the earlier, funnier ones!”

And yet…hold on…a new Franco performance got through to me today when l heard a recording of him reading a piece by Rajarshi “Tito” Mukhopadhyay, an 18 year-old Indian writer and poet. Franco doesn’t exactly breathe fire or rip the roof off. It’s just an unforced, gently emotional reading of some heartfelt probing words and thoughts from a kid who happens to be autistic. You can feel the kid’s patience, intelligence, curiosity, acceptance.

I always feel aroused when I hear movie actors do live performances (be it plays or readings) because movies never seem to allow them to go to town with a speech or a poem of any depth. Which is why it’s very cool and unusual to listen to actors act or read outside the bounds of movie scripts. Broadway or London theatre is one way to absorb this, but WordTheatre sessions, which Cedering Fox produces in Los Angeles, New York and London all year ’round, are another. I’ve been to four or five of these shows, and I’ve gotten major contact highs from them each and every time.

Franco and several other actors — Lorraine Toussaint, Dermot Mulroney, Barry Shabaka Henley, Richard Cox, Ian Hart, Wendie Malick, Ming Wen, Annette O’Toole, Gil Birmingham, Stephen Tobolowsky and Michael McKean — are going to read at a WordTheatre event at the Geffen Theatre next Monday evening (10.15). The show, called “Acts of Love: Children,” is a benefit for Cure Autism Now/Autism Speaks. It’s a one-night-only deal. I wish I took time to attend more of these things. You can go crazy just watching movies all the time. My personality sometimes testifies to that.