Hammond on hunkering down

It’s good to have Pete Hammond‘s Oscar- handicap column back in play, although it’s running on the Envelope this year instead of Hollywood Wiretap. His opening shot is that “a little game is being played” in order to keep the profiles of likely Oscar contenders low, or at least low-ish. As in Presidential politics, nobody wants to be seen as the front-runner too early. 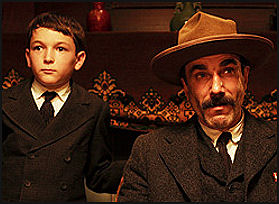 “Smart Academy consultants — battered by this year-round internet and mainstream media interest in the hunt for awards — are starting to act like CIA operatives, doing everything they can to prevent their prime contenders from peaking and burning out before they even open,” Hammond writes.

“Another savvy campaigner, having just seen a preview of a late-December entry, waxed rhapsodic about the film’s attributes and called the film absolute perfection, a ‘real contender,’ but then warned us not to say a word. Your secret is safe here!”

A late December entry? Not much of a secret there — There Will Be Blood or The Bucket List or Charlie Wilson’s War, right? And who in their right mind would call a Rob Reiner film “a real contender” and “absolute perfection”?