Last month British director Beeban Kidron (Bridget Jones: The Edge of Reason) began shooting Hippie Hippie Shake, about the adventures of Richard Neville, the publisher/editor of a famed counter-culture magazine called Oz that caught the airy-fairy mood and merriment of late ’60s London. (It actually published from ’67 to ’73.) Universal will probably open it sometime in the fall of ’08. 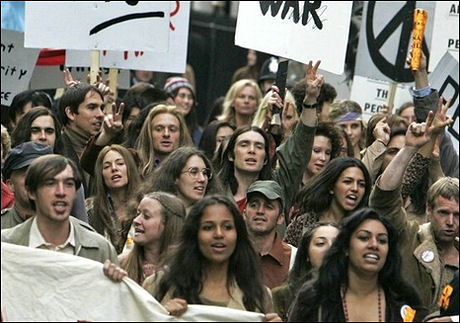 Written by Lee Hall and William Nicholson and based on Neville’s same-titled 1996 memoir, the film will focus on (a) the magazine’s general ups and downs, (b) an obscenity trail that resulted from Neville (Cillian Murphy) and colleagues distributing a certain sexually explicit issue, and (c) the relationship between Neville and girlfriend Louise Ferrier (Sienna Murphy).

I’d love to see this Tim Bevan-Eric Fellner production do it right, but haven’t hippie films always been a problem? Isn’t there some kind of curse upon any film trying to reenact or reconstitute that old love beads-slash-Bhagavad Gita-slash- Moody Blues vibe? Isn’t there something immensely difficult if not impossible in trying to make that incense-and-peppermints chemistry seem palatable by the standards of 21st Century culture?

Julie Taymor‘s Across the Universe, Robert Zemeckis‘ Forrest Gump, Oliver Stone‘s The Doors…what other films over the last 15 or 20 years have gone back there? Has any ’60s-era film felt half as authentic as Control does in its recreation of early to late ’70s England?

The potential for hippie-film awfulness is huge. I guess I’m thinking of stinkers like Ernest Thompson‘s 1969 and Rob Cohen‘s A Small Circle fo Friends, and Larry Kasdan‘s decision to chop off the flashback sequence in The Big Chill because (according to legend) everyone looked vaguely silly in their hippie haircuts and tie-dyed T-shirts. 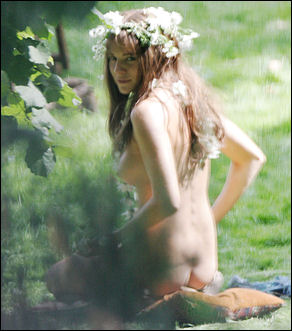 The most in-the-pocket depiction of ’60s vibes and attitudes came from five films — Blow Up, Easy Rider, M.A.S.H. (set in early 1952 Korea but totally informed by Los Angeles hipster attitudes of 15 years hence), Who’ll Stop The Rain? and Platoon.

Note: In the above protest-march photo, three darker-skinned women of an apparent Middle Eastern heritage are visible. This in itself makes Kidron’s film seem slightly inauthentic. People of Middle Eastern ancestry (Indian, Pakistani, Iranian) are quite numerous in greater London today, but their numbers were smaller in the late ’60s plus the strictness of their family and neighborhood culture has always discouraged outside fraternization and cross-fertilization, particularly with those of an anti-traditional counter-culture bent, and particularly among women.