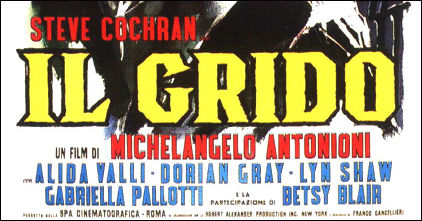 “As a tale of factory worker Aldo (American actor Steve Cochran), who has a breakup with his longtime lover Irma (Alida Valli) and leaves home with his young daughter to get a new grasp on life, the film cunningly borrows many neorealist tropes and then rattles them until they splinter.

“Viewers may at first think they’ve stumbled into a Vittorio De Sica movie involving struggling laborers and their cute kids, but the odyssey here proceeds not toward a final enlightenment or insight, but outward through vast, limitless landscapes that Antonioni brilliantly conceives as physical correlatives for Cochran’s state of mind.”