When this photo was taken in May 1972, Los Angeles was choking in smog (catalytic converters hadn’t been installed) and the traffic situation was considered to be pretty bad, especially during rush hours. Today, 35 years hence, traffic in this town is beyond any reasonable concept of toleration. I remember reading a news story in the mid ’90s that by 2010 the average driving speed in Los Angeles would be 11.2 miles an hour. That’s only two years hence. The situation feels pretty close to that now. 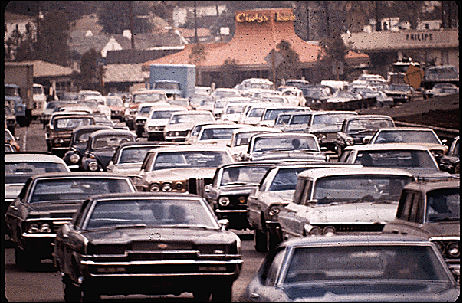 A drive that used to take 30 minutes in the early ’90s now takes at least 45 to 50 minutes, if not an hour. The only way to get around these days is to ride a scooter or a motorcycle. Otherwise you have to surrender to constant confinement. Cars are like little isolation cells that people ride around in, talking on their phones and listening to NPR and podcasts and getting more and more frosty and burrowing deeper and deeper into their ticks and fears.

A friend recently passed along an observation from screenwriter and longtime Los Angeleno Robert Towne to the effect that L.A. will soon be a town of absolute gridlock, and that during high-traffic hours the travel time from, say, the Pacific Palisades to downtown will eventually take just as long as it used to in the pre-World War I horse-and-buggy days. In this town and in this respect, cars have completely cancelled out their value in terms of speed. Ten years from now it’ll be almost like Blade Runner.

The only thing to do in L.A. these days is to stay indoors and not go anywhere, ever, unless it’s after 10 pm and before daybreak. It’s a city choking on itself. Travelling from Brooklyn to Manhattan and back on the subway is a much faster proposition these days. If I could clap my hands and move to Manhattan into a comparable space without the grief, I would clap my hands.