I respectfully disagree with Todd McCarthy‘s half-positive, half-dismissive Variety review of Ridley Scott‘s American Gangster, and his view in particular that “maximizing a gritty big-city story requires a credibility composed of thousands of small details, and this is one area where a citizen-of-the-world director like Scott can’t excel.” 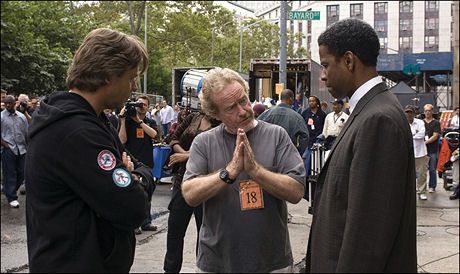 The situation, he says, is “akin to asking [Sidney] Lumet or [Martin] Scorsese to make a definitive film about crime in ’70s Newcastle — they could do a respectable, even exciting job of it, but it probably wouldn’t ring deeply true.”

But it does ring true. For me, anyway. Brits are famous for delivering American-set crime dramas with great chops and authenticity (as Karel Reisz managed with Who’ll Stop the Rain and John Boorman did with Point Blank), and this is one of those cases. I believed every New York second of American Gangster. For my money, Scott has not only skillfully channelled Lumet and Scorsese but the entire hallowed universe of ’70s urban filmmaking.

“American Gangster wants to be a great epic crime saga so badly you can feel it,” McCarthy says. “The true story at its core — of the rise, fall and redemption of a ’70s-era Harlem drug lord — is so terrific, it’s amazing it wasn’t put onscreen long ago, and it would be difficult today to find two better actors to pit against one another, as hoodlum and cop, respectively, than Denzel Washington and Russell Crowe.

“With so many elements going for it, this big, fat Universal release is absorbing, exciting at times and undeniably entertaining, and is poised to be a major commercial hit. But great it’s not.

“Memories of numerous classics hang over this film like banners commemorating past championship teams — The Godfather, Serpico, Prince of the City,, Scarface and Goodfellas, among other modern-era crime-pic landmarks. Like most of those, this is a quintessential New York story, one you feel could have been the basis for a Sidney Lumet masterpiece.

“But while American Gangster is made with consummate professionalism on every level, it just doesn’t quite feel like the real deal; it delivers, but doesn’t soar.”