Praise for Del Toro in “Fire”

Things We Lost in the Fire has bombed out with slightly less than half the critics — only 65% have thumbs-upped it on Rotten Tomatoes, 58% on Metacritic — but nearly everyone (except for Stephen Holden and maybe one other) has gone into full cartwheel mode over Benicio del Toro‘s performance and, to any fair-minded reader or watcher of the film, made a Best Actor Oscar nom seem mandatory. 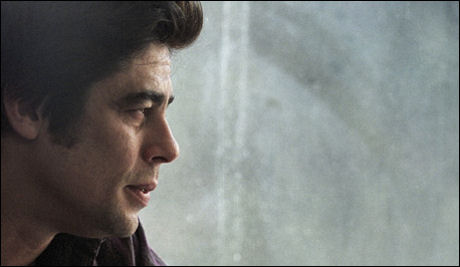 The Austin Chronicle‘s Josh Rosenblatt says it best: “If you’re bored some Saturday night, try this game: Close your eyes, spin around three times, and point a finger at Del Toro’s resume. Dollars to doughnuts, you’re going to land on one of the better acting performances of the last 20 years. Basquiat. Fear and Loathing in Las Vegas. Traffic. 21 Grams. Big Top Pee-wee. He can do it all.

“Yet somehow, with Things We Lost in the Fire, he’s managed to top even himself; this most recent performance is right up there with the best screen turns, not just of his generation but of all time: Brando in On the Waterfront. Hopkins in Nixon. Washington in Training Day. Rarefied air.

“In Danish director Susanne Bier‘s excellent new film, Del Toro plays Jerry Sunborne, a fortysomething junkie living in squalor in downtown Seattle who’s forced to re-examine his life after the violent death of his best and only friend, Steven Burke (the perpetually somnolent David Duchovny). Burke’s wife, Audrey (Halle Berry), never trusted Jerry even when her husband was alive, but she decides to call on him after realizing that raising two kids alone in her emotional state may be an impossible task.

“Things We Lost in the Fire is Bier’s first English-language film and her follow-up to the Oscar-nominated After the Wedding, and like that film, it’s an impeccably constructed and perfectly paced drama of domestic and internal volatility.

“In the end, this movie belongs to Del Toro. He imbues Jerry with such life, such ambiguity, such unsentimental complexity and depth that you can’t help but feel you’re watching the most intricately mapped depiction of addiction and strained humanity the film world has ever given us.”

Likewise, The Stranger‘s Andrew Wright states that “you’re mainly going to be watching Del Toro, who somehow slinkys and random-tangents his way into a fully realized being who’s never more soulful than when he’s dealing with the monkey on his back. The film has yet to be made that fully does justice to Del Toro’s alien transmissions, but Bier comes awfully close.”