Two random thoughts about Rob Reiner‘s somewhat messy but passionate online ad for Hillary Clinton, which was sent around today. 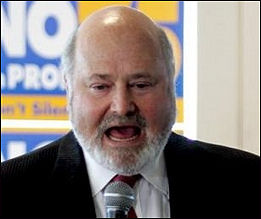 One, Reiner has cast himself in the spot, and seems very much of an amusingly hyper, judgmental live-wire type. (More so than he’s ever seemed to me during junket round tables.) So much so that you can’t help but wonder, “How could such a hyper, judgmental live-wire type make such cautious, edgeless movies like Rumor Has it, The Story of Us, Alex & Emma , North and Ghosts fo Mississippi for the last ten to twelve years?” Reiner doesn’t seem to have put himself into these films. At all.

And two, the central statement in Reiner’s spot comes when he advises a Hillary volunteer to tell people she’s calling that she’s “100% convinced that she’s the only candidate who can actually change things.” This, of course, is code for “she’s the only Democratic candidate likely to win” but is she? And given Clinton’s polarizing profile and temperamental nature, is it all that likely she’ll actually change things, or will she mainly agitate and enrage?