Control‘s Sam Riley having won the Chicago Film Festival‘s Silver Hugo Best Actor award tells us three things. One, there are others besides myself who believe Riley’s performance as Ian Curtis is not just phenomenal but award- worthy. Two, Chicago Film Festival voters are clearly too eccentric to influence industry thinking about ’07’s Best Actor finalists. And three, this “Chicago flake” factor will allow the Gurus of Gold and Envelope prognosticators to continue saying, “It’s very nice that you admire Sam Riley’s acting, Jeff, but c’mon, get real…we’re talking likely winners here.” 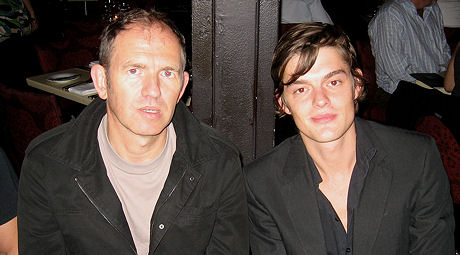 If a performance like Riley’s is imbued with that special something (which it obviously is), nothing else should matter. Certainly not at this stage of the game. The only reason people are saying “Riley’s too new” or “he’s not a serious contender” is because the Weinstein Co. is seen as a precarious player these days and particularly because they’re not spending big money to support Control and its makers.

Being new to the business doesn’t matter if there’s money behind you. Did people say 45 years ago, “Forget Peter O’Toole as a Best Actor contender for his Lawrence of Arabia performance…he’s too young and too unknown”? No, and the reason they didn’t is because Columbia Pictures was behind the Oscar campaign big-time, and so the industry sat up and showed obeisance before power and nominated O’Toole. It was that simple, and it’s this simple here and now. Sam Riley is, in a manner of speaking, the wet-behind-the-ears Peter O’Toole of 2007. He just doesn’t have big-studio pockets backing him up. That’s the only real difference.

On top of which is my old saw about there being plenty of time to play the status-quo Oscar prediction game after Thanksgiving. Now is the time for prognosticators to stand up for people who deserve the awards-consideration attention. Right now, I say to hell with the Academy fuddy-duds. Wave away all those people who “don’t know who Joy Division was and who will never see this movie.”

If I were king with dictatorial powers I would have all the Academy know-nothings identified and marginalized, if not expelled. Every organization is only as brave and vibrant and visionary as the amount of deadweight in its midst. A chain is only as strong as its weakest link. Purge the slackers and deadheads and the fog will lift.

The Chicago Film Festival website says the fest ends tonight (10.17), but the festival awards were announced last Sunday (10.14) on Michael Phillips‘ Talking Pictures blog/column, which is found on the Chicago Tribune site, and yesterday on Adam Fendelman‘s HollywoodChicago site.