This “what do you stand for?” Google/You Tube promotion for Robert Redford‘s Lions for Lambs (MGM, 11.9), which offers a $25,000 cash prize for the best short political video piece submitted, might raise awareness and get the word going. Maybe. What would really help, I suspect, would be for MGM to release stills that show costars Meryl Streep and Tom Cruise doing something besides sitting in that damn Washington, D.C., office with Cruise instructing/lecturing Streep about the hard choices facing America in the fight against terrorism. 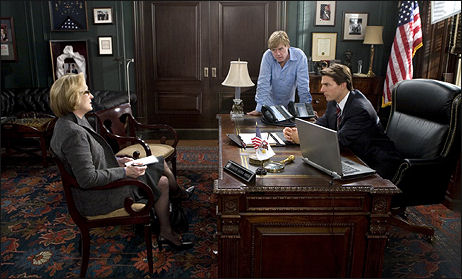 For weeks and weeks I’ve been looking at the two of them in trailers and stills, wearing those same outfits and talking, talking, talking to each other — Cruise clenched and focused, Streep doubting and sardonic. Do they do anything else in the film? At all? I’m starting to wonder.

“The lion and the lamb shall lie down together, but the lamb won’t get much sleep.” — a quote attributed to Woody Allen.