Jerry Seinfeld‘s Bee Movie opens a week from Friday (11.2) and nobody’s seen or said a thing about it. Except for what was said and shown at the big Cannes Film Festival promotion five and a half months ago. The first screenings aren’t happening until Tuesday, 10.30 and Wednesday, 10.31. The only thing to go on today is a softball Seinfeld profile by N.Y. Times guy David Itzkoff. 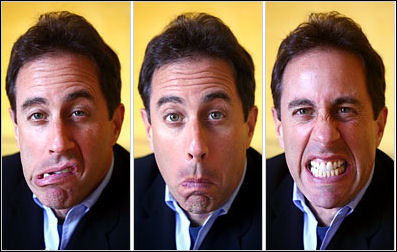 The best part of the piece explains how Seinfeld “can be affable with fans, but he doesn’t hide a certain earned arrogance. When one stunned onlooker [at a restaurant] asked for his autograph, Seinfeld said, ‘Sure’…then kept walking straight to his table.”

“While attending the United States Open tennis tournament, Seinfeld recalled, he was approached by a well-attired fan who handed him a business card and invited Seinfeld to visit his brokerage house. Both men became noticeably perplexed when the offer was declined. ‘I said, we don’t know each other. You’re a total stranger,’ Seinfeld recounted. ‘He says, but we really like you. I said, thank you so much, but this is as far as we go.'”

“Seinfeld adds: ‘This is a sophisticated guy that doesn’t understand the TV only works one way.'”

Bee Movie is about Barry B. Benson (Seinfeld), a bee who’s not happy with the idea of just making honey for the rest of his life. One day he gets to leave the hive on a honeysuckle mission in Manhattan’s Central Park, and eventually runs into humans who try to swat him to death. 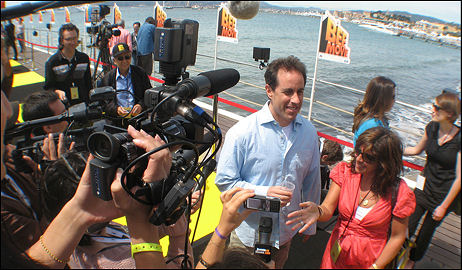 Barry is nearly all in at one point when he’s saved by Vanessa (Renee Zellweger), with whom he promptly falls in love. (Kind of a King Kong-Ann Darrell romance in reverse.) Then he decides to talk to her. In English, that is. Then he learns about the human honey business, and decides that humans are ripping off the bees in order to do so, and so files a lawsuit to try and prevent this.

As I wrote last May, “I like ‘silly’ if the movie really goes for it whole-hog.”