Partly as a result of a certain online journalist making a call last week to Paramount Studios which led to the “sting” arrest of Roderick Davis, the 37 year-old Cerritos resident who tried to peddle hundreds of stolen photos from the shoot of Indiana Jones and the Kingdom of the Crystal Skull for $2000 bucks, director Steven Spielberg hosted a small “thank you” lunch and set visit today for a small group of fanboy web journalists at Universal studios.

The group included CHUD’s Devin Faraci, “Quint” from Ain’t It Cool and, I’ve been told, a rep from Slashfilm and Dark Horizons. I’m not sure if Latino Review‘s Kellvin Chavez (who flew out from NYC for the meeting) and IESB.net’s Robert Sanchez attended, but I’m told they were invited at one point.

Spielberg, currently directing Indiana Jones and the Kingdom of the Crystal Skull, was presumably looking to bond with these leading web journos and foster allegiance in case another stolen-photo incident occurs down the road.

The luncheon/set visit was almost cancelled yesterday because “too many people found out about it,” I was told by two sources. The invited parties were “supposed to keep it to themselves…they shot themselves in the foot.” A guy involved in the back and forth told me yesterday that “some people have gotten their butts very hurt over [this] whole thing, and Paramount is dealing with sites complaining about not getting invites.”

Here’s Quint’s story on AICN about the meeting. a story about Transformers 2 that was sourced directly to Spielberg by way of Devin Faraci was posted a little while ago.

I wrote yesterday about the above-described online journalist who made the call, etc., but I took the story down because the journalist called to express concern that Davis’s accomplice (or accomplices) might possibly take revenge for providing information that led to his arrest. I’ve never written about a criminal matter before, but I decided yesterday that if there was a one-in-a-hundred chance that some kind of payback might be visited on this journalist or his family (a scenario out of a bad TV episode) I didn’t want to be involved. 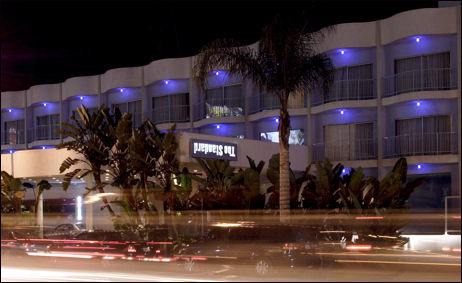 I had called this journalist last weekend to encourage him to write a detailed piece about the episode and maybe even sell it to some large, well-paying print publication. It’s got everything, after all — a threat to the profile of a much-awaited film, a big-name director (Steven Spielberg) and big movie stars (Harrison Ford, Cate Blanchett, Shia Lebouf), stolen property, and a secret sting operation arranged in collusion with authorities.

The guy was contacted seven or eight days ago by Davis with an offer to sell the stolen Indy 4 photos or a lousy two grand. A couple of sample photos were sent to prove that Davis had the goods. The online journalist quickly notified Paramount publicity about the offer, they called the L.A. Sheriff’s office and a “sting” meeting was arranged to to happen last Tuesday afternoon at the L.A.’s Standard Hotel. (Note: I was told by a Paramount source that the FBI was involved.)

A story about the theft and arrest ran on IESB.net last Tuesday, saying that “the thief was apprehended by LAPD and the FBI” even though, according to L.A. Times reporter Richard Winton, it was an L.A. Sheriffs operation.

“A meeting between the alleged thief and the unnamed online reporter was set up for 4:00 pm at the Standard Hotel on Sunset Blvd. The sting went as planned and the arrest was made. The IESB has been told that the alleged thief was in possession of the stolen property.”

A 10.4 L.A. Times story about the bust by Winton and Andrew Blankstein said that lawmen “e-mailed the suspect, saying they were interested in purchasing the photos,” alrhough it made no mention of Sanchez. The feds rented a room, Davis showed up and tried to talk business…surprise, busted, cuffed.

Both Winton and the online reporter told me they’d beebn told that Davis had an accomplice or accomplices, and that this said parties are on the loose.

More interesting details, I’m sure, have yet to be revealed. I just hope it gets written up thoroughly some day, and written well.