Jamie Stuart‘s 2nd New York Film Festival short is a lot trippier and more engaging than the first, which I posted on 10.2.07. 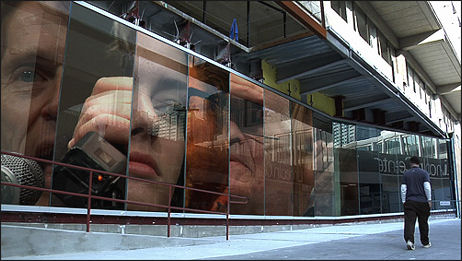 He’s still using that Forbidden Planet music on the soundtrack to suggest a feeling of being disengaged as this or that filmmaker answers a question, but the overall cutting is sublime and the first 40%, in which images and dialogue from various post-screening press conferences are digitally projected upon (and made to fit within) various Manhattan ad spaces, is flat-out brilliant.

The first portion of this section shows Stuart emerging from the Columbus Ave. subway station, hearing the voice of Before The Devil Knows You’re Dead director Sidney Lumet behind him, and then turning around and seeing a video of Lumet’s press conference playing on a plasma screen mounted just above the subway stairs. He stands there transfixed as Lumet prattles on about…well, not much.

We later see a clip from Willem Dafoe‘s press conference projected on a Times Square billboard, another clip shown within a car’s side rear-view mirror, and an assortment of clips pasted upon a group of outdoor display posters.

I asked Stuart to send me a frame capture of of this last scene. Maybe he’ll respond later today.