Yesterday Wilson Morales of blackfilm.com posted a chat with WGA negotiator Terry George (culled from an interview George gave to promote his latest directing effort, Reservation Road) about the state of discussions between producers and the Writers Guild regarding a possible strike. DGA and SAG have related issues, says George, but right now the suits and the writers are miles apart. 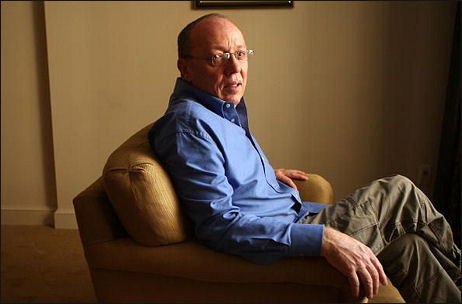 The studios, George said, are saying “this an antiquated system [we’re living under] and we want to revisit the residual situation. The residual is what most actors and writers live off. It’s that little bit of money you get back when a film shows. They say they want to go back to a profit-based distribution thing.”

And the hell with that because the studios are world-famous for using an account- ing system that, George says, “is beyond mafia bookkeeping.” That David Mamet/Speed-The-Plow line, “There is no net,” is part of the lore and legend of this town. And WGA negotiators understandably feel that allowing their incomes to be governed by studio accounting notions of what is and isn’t profitable is, to put it mildly, bordering on comical.

“I still get statements on Hotel Rwanda which basically say we are $20 million dollars in the red and [ones that say] In The Name of the Father is $16 million dollars in the red, so the notion that writers and actors work until they declare a profit is ridiculous. It’s a smoke screen to get away from what this all about, which is that the whole industry is moving over to the internet and the new media.

“All we are saying is to give us a little piece of that and we would be very happy with it. I don’t know if they think they can bust the WGA or the whole industry or make a change here, but we’re not going for it. We’re not asking for a lot. We’re asking for a portion of this; and they have been trying over the last few years with reality TV shows and non-union writers just to chip away at that.

“My mood and the mood of some of the Guild is `Let’s not wait til June 30th’. They all think we are going to wait [until] June 30th and wait for the actors to come out and by that time they would have stockpiled 200 films and it will be a de facto strike anyway. I’m all for going as soon as we can. Let’s get it out there and see. Given the level of profit that’s been made now and the ‘Frank Purdue-ization’ of the whole product, to turn around and say the writers and eventually the actors shouldn’t have a piece of that is ludicrous.

“We’re not stupid enough to call a [strike] date” — October 30th or November 1st have been mentioned — “that everyone else decides for us. We are going to look at the most strategic time if they are not willing to negotiate and then make that move then or go the membership and say, ‘Look, this is basically is an attempt to destroy this union, which I think it is or to weaken everyone to the point of where, the future of the whole industry, being a virgin again or something.'”