A friend is raving about a Broadway preview performance he just saw of Aaron Sorkin‘s The Farnsworth Invention, a play about how RCA’s David Sarnoff (Hank Azaria) more or less ripped off the patent rights to an amazing new invention called “electronic television” from young inventor Philo T. Farnsworth (Jimmi Simpson). 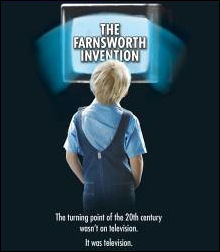 Apart from calling the play brilliant and immensely satisfying with superb perform- ances (especially by Simpson), my friend is saying it will translate beautifully into a film, and that Steven Spielberg, one of the play’s producers, is certain to either produce or direct it.

Directed by Des McAnuff, The Farnsworth Invention has been previewing at the Music Box theatre since 10.15, and will open 13 days from now — on Wednesday, 11.14.

The Farnsworth Invention, says a press release, “centers around the bitter conflict that pitted Philo T. Farnsworth, a boy genius who invented television as a high school student in 1927, against David Sarnoff, the head of the Radio Corporation of America (RCA). The legal battle between Farnsworth and RCA would later become known as one of the great, tragic examples of legal and industrial force combining to crush a rightful patent owner. In a race that would change humanity forever, two men battle one another for honor, glory and a place in the history books.”

Spielberg became a producer of the show after seeing a workshop performance at the La Jolla Playhouse sometime between 2.20.07 and 3.25.07, or the span of its run. 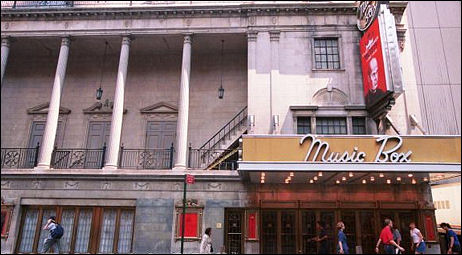 Simpson is making his Broadway debut with the play. He played the kid who got shot along with his blonde married girlfriend in the very beginning of Zodiac. His other films credits include Herbie Fully Loaded, Loser, D.E.B.S. and Seraphim Falls.

My friend says Sorkin was at the performance he attended and was signing autographs after the show.