Time does McCarthy, the Coens

Time‘s Lev Grossman orchestrated and presumably edited a q & a discussion between Cormac McCarthy, author of the novel of No Country for Old Men, and director-writers Joel and Ethan Coen, who made the immaculate film version, but he wasn’t allowed to participate verbally. Because McCarthy is extremely press shy, Grossman had to sit on the couch and just listen. 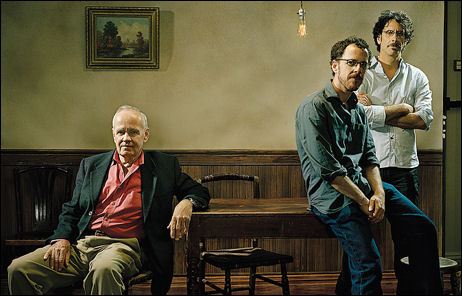 What resulted is an okay thing, but it might have been better with a pushy journalist asking intrusive questions from time to time. An extra pair of editor eyes would have helped as far as the photo caption is concerned. On Sunday afternoon, it identified the filmmakers as Joel and Ethan “Cohen.”

In the same issue, Richard Corliss reviews the 11.9 Miramax release and says “it’s a shame” it doesn’t open until after Halloween “since it has a villain crazier, scarier and more implacable than any horror ghoul.

“As incarnated by the great Javier Bardem, Anton Chigurh is a killer from hell who likes to play mind games with his victims before he makes them play dead. How could an ordinary fellow like Llewelyn Moss (Josh Brolin) hope to elude this monster, when Moss has $2 million that Chigurh plans to get back without saying please?

“Even when Joel and Ethan Coen are writing originals, their movies often have the texture and density of novels. For their first official adaptation from a prime American author, they have stayed remarkably faithful to the Cormac McCarthy story, including a detour at the end that will baffle some viewers.

“But the rest is tough, tangy and thrilling — perfect scenes of rising tension, wily escapes, fatal face-offs. There’s one moment (it’s just a phone ringing downstairs) that will churn your blood and turn it cold, and plenty other frissons that could make this the biggest hit of the Coens’ sly career.”