Referring to that 12:18 pm item about the New York “Vulture” guys having removed Charlie Wilson’s War from the Best Picture hot-to-trot list due to rumors about extra shooting, a Universal publicity guy got in touch and set things straight. 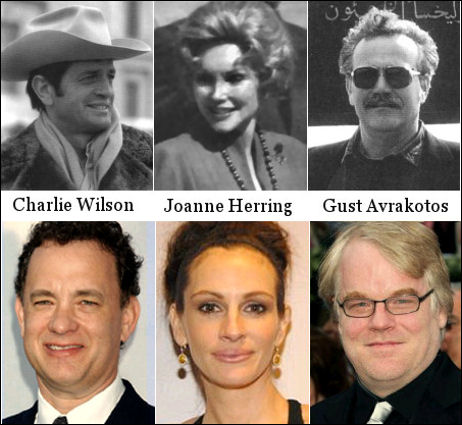 “I wish you’d check in before perpetuating rumors. This isn’t studio spin: there were no recent or costly reshoots on Charlie Wilson’s War. Just didn’t happen. There were a couple of days reshot many weeks ago because of a weather impact in Morocco. And that was nearly fully covered by insurance. That’s it. Nothing more.

“This is some sort of manufactured thing that gets passed along as true. It ain’t.

“But even if it were true…good. Good for any director who is willing to keep working on a film and finding its best version. Better that than the filmmaker who thinks the first cut is a perfect and precious thing that shouldn’t be altered in any way. Shouldn’t a filmmaker use the time given to keep working, even if that means adding a couple of different scenes or takes? I don’t understand this rush to judgment about what reshoots mean.

“In any event — the Charlie thing is a myth…didn’t happen.”

For what it’s worth, I completely agree that having the option to augment or re-do with extra shooting is a very good thing that always results in improvement. (Unless it happens under the gun with no time to reassemble and refine, like with Factory Girl.) I always augment and rewrite my column stuff so I don’t see the big deal.