The Heartbreak Kid was never tracking through the roof, but “it looked like $20 million” or something close to that. Nikki Finke reported late yesterday afternoon that this projection had been scaled back to $15 to $16 million, and now even that figure hasn’t been met. The Farrelly Brothers/Ben Stiller film did about $4,585,000 yesterday and is projected to earn $14,434,000. 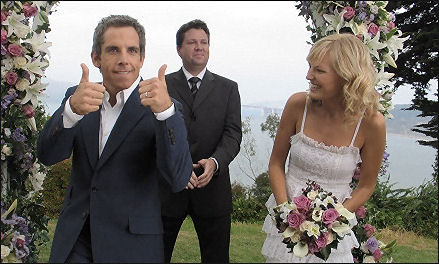 That’s a bit of a stunner. Obviously people detected something in the ads and trailers that turned them off to some degree, but what? Marital discord, betrayal, embarassment, humiliation….something. I suspected that the film’s mysogynist element might hurt business after a few days in theatres, but I didn’t see a first-weekend shortfall. The reviews were pretty bad (some were downright hateful), but this is a very funny film at times. Anyway, a big downer for Peter and Bobby Farrelly (remember those Something About Mary days when they were the kings of screen comedy and Judd Apatow wasn’t?) and not such a good thing either for Ben Stiller. It’s a tough world out there.

Good new for Michael Clayton, though. Tony Gilroy and George Clooney‘s corporate thriller opened in 15 theatres, pulled down about a little $12,000 per screen yesterday and is looking at a $44,000 average over three days and a cume of $688,000.

Wes Anderson‘s The Darjeeling Limited expanded to 19 locations and will have earned $29,000 a print by Sunday night.

The Kingdom will be #2 with $9,471,000, off 45% last weekend’s opener. It’s not going anywhere. What does Jamie Foxx‘s quote have to do with the price of rice? Nothing, but the Kingdom shortall will almost certainly be affected by this.

The Assassination of Jesse James expanded to 61 theatres and will pull in about $6700 a print for a cume of $409,000. It’s pretty much dead. I did everything I could to spread the word about Andrew Dominik‘s superb film, but if the dogs don’t want to eat the dog food you can’t stop them. (That’s a Samuel Goldwyn-ism mixed in with something else.) I pleaded with HE readers to drag their reluctant friends to this film, but very few obviously did. The moviegoers of this country are like unwashed junkies, walking around looking for quick-fix, feel-good movie highs. They don’t read reviews, they don’t care about ’70s movies, they have no depth or patience with anything, and too many of them actually enjoy hanging around Disneyland pod-people environments like the Grove, which are being replicated in every city and country around the globe. It’s pathetic, and on top of everything else it’s going to be Hilary Clinton vs. Rudy Giuliani in the Presidential race.