“I know you don’t delve into music too much, but if you’re at all interested, you should check out the Bruce Springsteen album that comes out today, Magic. It relates a little bit to what you’ve been talking about regarding the Iraq-oriented films. He has made an album that at first obliquely and, at the very end, overtly gets into the tragedy of the war and the deception behind it (which even the title alludes to). 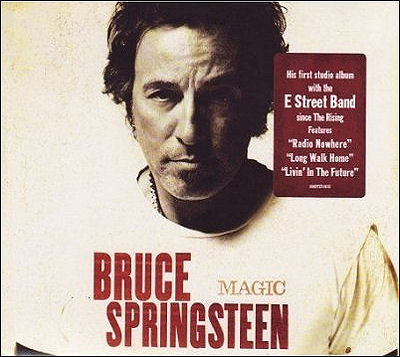 “And he’s done it in the form of his first record with the E Street Band that sounds like the most classic E Street Band album since Born in the USA 23 years ago.

“In other words, he’s candy-coated a bitter pill that speaks to the truth of America today — brilliantly, uncompromisingly, and entertainingly. It’s the best album I’ve heard in at least a decade, and I think it takes about a dozen listens (I’m probably on about my 50th) to really realize what he’s achieved. Now, if someone could figure out a way to make a film that pulled off that same balance.” — from Entertainment Weekly‘s Chris Willman.