Has anyone heard when and where the Charlie Wilson’s War junket is taking place? Just asking.

I sat down earlier this evening with There Will be Blood costar Paul Dano. We know the same people and have talked at a couple of parties, but this was the first interview. Dano plays a dual role — twins, actually — in There Will Be Blood. “Paul” is a bright, mature, realistic fellow; “Eli” is an opportunistic evangelical creep. Dano delivers on the intensity and then some. He and Daniel Day Lewis have a helluva final scene together. 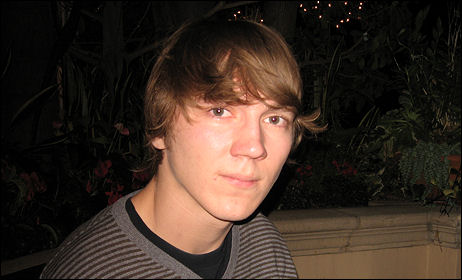 Here are two mp3 files of our talk. The first is longer than the second.

For my money Dano had a slyer, deeper, more interesting thing going on in Little Miss Sunshine than did his Oscar-winning costar Alan Arkin. Dano and Steve Carell obviously share the film’s richest and most intimate scene.

Our common denominator is having both lived in Wilton, Connecticut, for a few years. Dano, 23, graduated from Wilton High School in ’02. He’s currently living in Manhattan’s East Village and starring onstage in Jonathan Marc Sherman‘s Things We Want, directed by Ethan Hawke and costarring Peter Dinklage, Josh Hamilton and Zoe Kazan. 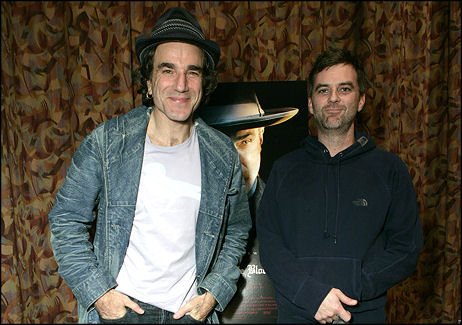 I love the gentle British inflections in Lewis’s natural speaking voice. When was the last time he used them in a film? Not recently. And not The Age of Innocence, not The Crucible, not In The Name of the Father. Was it A Room With a View? The Boxer?

I was struck by how tall and gangly Lewis is when he first walked into the WGA theatre lobby while the film was still running. I’ve never sensed his being this Abraham Lincoln-ish — rain-thin and about 6′ 3″ — from his appearances on film. There’s also the matter of his big head. Almost all big stars have them. I thought of this as Lewis sat next to Ansen during the q & a. Lewis’s face is a good 35% to 40% larger than Ansen’s, and that’s a conservative estimate. (It was about the same ratio as indicated in the above photo of Lewis and Anderson.)

In clip #1, Lewis explains the attitude of his Blood character, Daniel Plainview, toward Paul Dano‘s Eli, an evangelical huckster, to a woman in the audience. 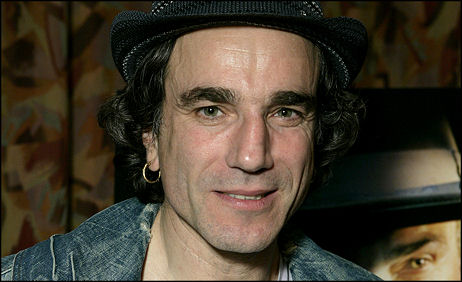 In clip #2, he’s explaining to another female questioner how Plainview comes to suspect that Kevin J. O’Connor‘s Henry character may not be his actual brother, as has been claimed. It’s not a very smart question, but Lewis has fun with her and shows good humor. (At one point he says, “I’m so confused!”) As I said to Ansen later, sometimes the dumber questions get the better answers.

And in clip #3 — the best — Lewis responds to that question that young actors refuse to stop asking in situations like this, which is “what advice would you have for an actor just starting out today?” Lewis’s response, which mainly offers a warning and an urge to come to grips, is quite good. Gets a round of applause.

Apologies to readers and Beowulf producer and co-writer Roger Avary alike for screwing up the sound link to our chat the other day. (Two days of virus issues scattered my synapses more than usual.) Here’s the real deal — a chat with Roger about the ongoing Beowulf animation issue. 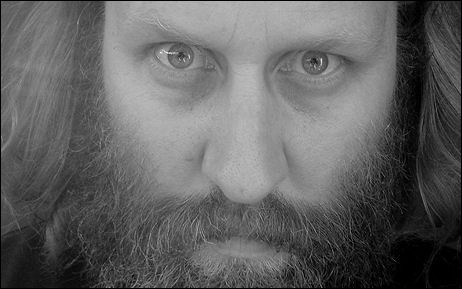 A couple of readers on Deadline Hollywood Daily suggested a nice fantasy gesture — i.e., that showbiz bloggers urge readers to boycott all movies and TV shows en masse for a single agreed-upon day over the Thanksgiving weekend to show support for striking writers. Hitting the producers and studio chiefs where it hurts is pure Frank Capra, but I love it. Like those good citizens of Bedford Falls pouring into George Bailey‘s home on Christmas eve to help him raise that $8 thousand, only withholding instead of giving.

The problem, of course, is that most Americans are lifestyle junkies and drunkards — addicts who don’t want to know from reality, much less the politics and pay rates of the entertainment industry. They’re vegged out, they want what they want because there’s room on their debit or credit cards, and they really don’t care. If you’ve ever worked for a political campaign or tired to organize a rally or a march, you know that people with addiction problems can never be counted on.

That said, pushing for a Thanksgiving boycott is a great idea. If anyone wants to decide which day, I’ll spread it around as much as I can.

I recorded most of last night’s conversation between Newsweek‘s David Ansen and There Will Be Blood costars Daniel Day Lewis and Paul Dano and director-writer Paul Thomas Anderson following last night’s WGA screening. I created three mp3 files out of three interesting Lewis riffs, but they’ve been sitting all day on the frozen laptop. It’s been repaired, thank fortune (the Geek Squad guys just called), so I’ll put them up later tonight. 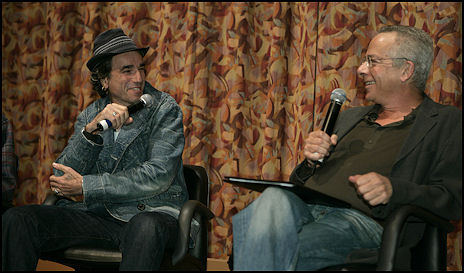 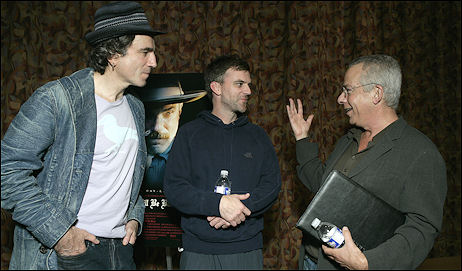 I realize it may have occured to some that Oscar-chasing season (mid-July through late February) is about power and prestige and so on. There’s also the satisfaction of winners knowing that the term “Oscar” is certain to appear one day in their New York Times obituary. There’s also the underlying current about wanting to affirm certain emotions, values and viewpoints by celebrating movies that express these things, but let’s put that one aside for now. What I’m about to say is nothing remotely new, but I’d just like to reiterate it for the record.

There are two prime motivations driving Oscar handicappers in the picking of likely nominees for the major categories. The dominant impulse is to show obeisance before established power — an inescapable impulse due to genetic coding. 90% of all hyped would-be nominees are validated names who’ve performed in or worked on films that (a) have performed respectably with the ticket-buying public and (b) have moderately well-bankrolled distributors backing their films.

There is no substantial cultural /behavioral difference between most of the Envelope and Gurus of Gold hotshots picking their likely contenders and spear-carrying Bemba warriors in Zambia bowing down before the local chief during a village feast.

The secondary impulse is to show generosity of spirit — a helping-hand instinct (never driven by merit alone, but merit plus “likability”) that may bring a promising newcomer into the fold, or congratulate an aging, Oscar-less veteran for decades of solid, first-rate work.

Of course, all promising newcomers have to be amply supported by established, well-funded distributors, and they need to appear to be headed for some kind of connected/powerful future, which theoretically allows for a possible return-the- favor gesture down the road to handicappers (and their publications) who supported the actor/artist when they needed it. And of course they need to self-promote and schmooze their asses off during the run-up weeks to make it all kick in.

In part, the previous graph explains the Best Actor nomination given 45 years ago to total newcomer Peter O’Toole due to very ample support by Columbia Pictures, and the lack of any handicapper momentum at all for Control‘s riveting Sam Riley, who has only the slight support of the Weinstein Co. — a distributor with the nagging rep of suffering from diminished industry power — and guys like myself and Peter Howell behind him.

I was complaining again last night at the WGA There Will be Blood after-party that Benicio del Toro gives a Marlon Brando-level performance (make that early 1950s Brando -level) in Susanne Bier’s Things We Lost in the Fire. A journalist pal smiled and said, “Fight for it!” but she and I know it’s a lost cause. Hell, it’s not even a cause.

Nobody’s standing up for Benicio because (a) Fire was panned by a good portion of the critics and lost money besides, (b) there doesn’t seem to be any interest on Paramount’s part to finance a Benicio campaign, (c) Benicio is apparently saving himself for a Best Actor campaign next year for his Che Guevara performance in The Argentine and Guerilla , and (d) a Things We Lost in the Fire Benicio campaign wouldn’t work anyway because critics, handicappers and Academy members don’t like (or at least are cool to) junkies.

There’s no “obesiance before power” satisfaction in talking up Fox Searchlight’s Once, even though it feels to me like the most emotionally complete and fully self-realized film released this year, and one of the most affecting love stories in many a moon. Not because Fox Searchlight isn’t powerful, but because no one has decided if director John Carney will be around the long haul, and because the two stars, Glenn Hansard and Marketa Irglova, are musicians, not actors, so what are they going to for “us” down the road? Nothing. So the industry consensus is “great movie, loved it…bye!”

Another half day has been lost to virus issues. While picking up my finally virus-free laptop at Best Buy last night I was talked into buying the respected Kaspersky Anti-Virus 7.0 software to guard against future problems. I installed it this morning and lo, within ten minutes my newly repaired, running-like-a-charm laptop had ceased all functionality. Nothing would click open; it was like the disk drive has been covered in cold maple syrup. I couldn’t even get into safe mode.

I had to take the damn unit back to the Geek Squad guys and explain that everything was fine until I took their advice and installed a software that they sold me on. An intense, intelligent guy who looked like James McAvoy except for the W.C.Fields nose said I should have uninstalled the other virus program first. (Which I would have, but it wasn’t in function mode because I hadn’t renewed the license so what could it matter?) Come back in six hours, he said.

Why is so much of life like this? Why do I keep delaying about buying a Mac? Woody Allen had it mostly right about the human race being divided into two camps — the horrible and the miserable. If I could clap my hands and send a misery rocket over to the software technicians at Kaspersky (the ones who forget to include a prompt reminding all installers to delete all previously loaded virus software, active or inactive, before proceeding), I would clap my hands. Cheerfully. With vigor.