I deliberately didn’t get into Envelope columnist Tom O’Neil‘s ecstatic response to the 17-minute preview of Sweeney Todd that screened the other night at Lincoln Center. O’Neil, passionate fellow that he is, is invested in his love of great musicals and Stephen Sondheim‘s Sweeney Todd B’way show in particular, and he wants to see it all brought full circle. And that’s fine. 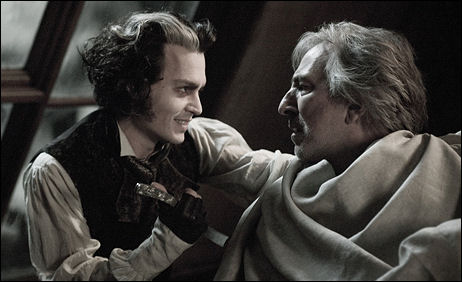 Sweeney Todd‘s sound and visuals are still being mixed, so it’s not being shown. But there have been enough preview excerpts of upcoming big-ticket films in the past to feel suspicious about the decision to show only 17 minutes’ worth to a hometown (i.e., Manhattan) audience. I think that screening a short “sizzle reel” at this stage of the game indicates obvious caution and bet-hedging on the part of the film’s marketing strategist Terry Press (who ran last year’s Dreamgirls campaign). You can make almost any movie look fairly momentous if you cut together a short-enough reel. I was boondoggled myself once with a 30-minute reel of a new film.

It’s happened often enough that it’s come down to a very simple equation by way of a very simple mythology: short promo reels = film-flammery. The Sweeney Todd Lincoln Center show would have obviously felt a little more forthright if, say, it had run 25 or 30 minutes — more songs, more scenes, more substance. Johnny Depp‘s singing may be fine, as O’Neil wrote today; ditto Helena Bonham Carter‘s Mrs. Lovett performance when all is said and done. Nobody knows. The film will start to be shown to press later this month

Press admitted to the Hollywood Reporter‘s Steven Zeitchik that Todd “has many niche audiences that need to be dealt with, and they don’t really cross. There are Sweeney Todd freaks, there’s a sophisticated theatergoer crowd, there are the Tim Burton fans, and there are the young girls who love Johnny Depp. It’s like threading many needles.”

Young girls who love Johnny Depp? Jack Sparrow, maybe, but what young girls have a yen for a married 44 year old with a skunk “do” playing a singing throat- slitter? Depp’s under-25 coolness factor began with 21 Jump Street in the late ’80s and peaked with What’s Eating Gilbert Grape? (’93). Everybody loved him in the Pirates of the Caribbean series, sure, but I never heard that “young girls” were in the vanguard.

CHUD’s Devin Faraci is reporting there were re-shoots done on I Am Legend “as late as last week.” I can only shrug if this is true. I didn’t care about a devastated, post-apocylaptic urban future with mutants running around when it was a Charlton Heston movie, and I don’t care at all about a post-apocalyptic Manhattan with mutants running around with Will Smith manning the fort. Does anyone? And does anyone find the prospect of being asked to believe that Smith could be a brilliant scientist a little challenging? In film after film Smith plays nice guys who are smart, amiable and resourceful. “Brilliant” means conveying a lot of things that are beyond his range…sorry. 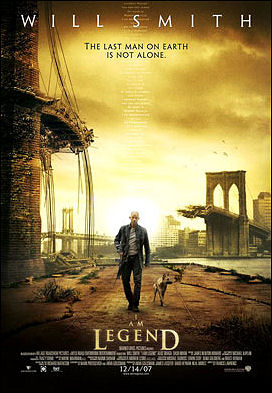 Two major-leaguers and an ambitious scrambler at the legendary post-premiere party for One From The Heart that followed a Radio City Music Hall gala premiere in February 1982. I found this in my Norman Mailer folder last weekend. I was speaking with Coppola first (having recently done a long phone interview with him) when Mailer walked up. I stepped to the side and listened. I remember Mailer calling Coppola’s film “photo-realism” and saying at the end of their chat, “I salute you.” 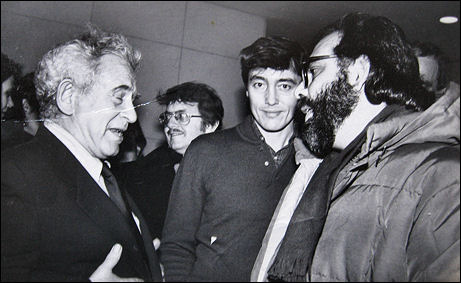 A new Cloverfield trailer will run in theatres with Beowulf beginning tomorrow morning. (Reason in itself to buy a ticket?) In the meantime, atrocious camera-phone video footage of the trailer has gone up at zshare — clip #1, clip #2, and clip #3 — and been linked to by New York‘s “Vulture” column.

The new December Esquire came out yesterday (or the day before), with six actors being celebrated on the cover for having given the mag’s choices for “Performances of the Year.” Denzel Washington in American Gangster, Cate Blanchett in I’m Not There, Javier Bardem in No Country for Old Men, Robert Downey in Zodiac, Emile Hirsch in Into The Wild and Jake Gyllenhaal in…Rendition? 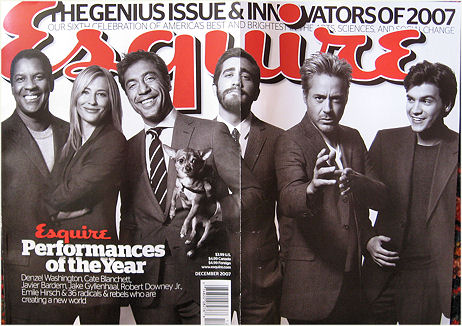 It’s not that Gyllenhaal plays his Egypt-based CIA guy badly or ineffectively, but that Egypt-based CIA guy is written as such a revoltingly passive wuss. As Esquire‘s Mike D’Angelo points out, Gyllenhaal “spends much of Rendition standing in the corner of a dark room, watching as some poor soul gets beaten, doused and fried…it’s a near-silent performance.”

For me, Gyllenhaal’s inactivity is infuriating. He’s not just a guy doing nothing, but an emblem of do-nothing types the world over. Two thirds of the way through a screening of Rendition at the Toronto Film Festival I leaned over to a friend sitting next to me and said, motioning at Gyllenhaal, “Is he going to do anything or what?”

Gyllenhaal’s guy finally makes a move at the very end, yes, but it comes way, way too late.

I realize that tens of millions of law-abiding citizens out there go through life immobilized by fear, uncertainty and or obedience to authority, but characters like this are not worthy of anyone’s attention on a movie screen. A principal character has to do something in a drama. And if you can’t do something (due to fear, uncertainty or unstoppable obedience to authority), you have to at least let it out in some way. 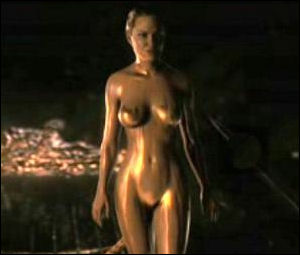 “With long, straight blond hair and a headband, Beowulf seems like Bjornborgowulf, but this is one Scandinavian who isnÃ¢â‚¬â„¢t content to have a killer forehand. ‘I’m Beowulf,’ he declares. ‘IÃ¢â‚¬â„¢m here to kill your monster.’ And quaff your drink and swive your wenches, please.

“The queen (Robin Wright Penn) frostily notifies Beowulf that ‘there have been many brave men who have come to taste my lordÃ¢â‚¬â„¢s mead,’ at which point the newcomer must be wondering if he has stumbled into Ye Olde Gay Scene.

“Undeterred, Beowulf promptly strips naked in front of the queen, promising her that after he slays Grendel heÃ¢â‚¬â„¢ll be happy to do some naked co-ed jousting with her, and then things get really strange. Grendel attacks again while Beowulf is nude, and while motion-capture Ray Winstone certainly has the carved physique nature denied the pillowy Ray Winstone we know from The Departed and Sexy Beast, youÃ¢â‚¬â„¢d think heÃ¢â‚¬â„¢d want to throw on some chain mail or at least pick up a codpiece before engaging in battle fierce with the slime-dripping beast.

For what it’s also worth, a friend saw Beowulf with a somewhat older industry crowd last night and reports that some of them were “howling” at some of the lines. Urgent, intense eros = hah-hah steam valve escape.