Beowulf producer and co-write Roger Avary, just back from the film’s London premiere and international press junket, called to debate the ongoing Beowulf animation issue as I was editing the Paul Thomas Anderson interview earlier this afternoon. 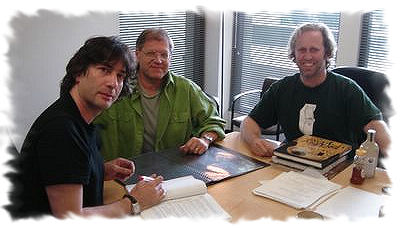 I brought up the fact that basing animated human images upon live-action footage — a Beowulf speed-bump issue for some — is a technique that goes all the way back to Disney’s Snow White and the Seven Dwarfs. As I understand it, Disney animators used a primitive form of rotoscoping to make the body language and some of the features of Snow White, the evil queen and the handsome prince seem more life-like.

I said towards the end of our chat that a critic friend who hasn’t seen Beowulf confided he wasn’t looking forward to the 3D headache syndrome, which Beowulf‘s IMAX 3D process is absolutely free of. Avary agreed that previous 3D films (the 3D Spy Kids, for one) have definitely been a little rough in this respect. I suggested that the Beowulf newspapers ads should promise a relief from this in so many words — “No headaches!”