In response to yesterday’s Beowulf piece that said (a) Ratatouille‘s producer John Lasseter has been against the idea of Beowulf being classified as animated, and (b) there is no sensible explanation for anyone taking this position (i.e., the fact that it began with actors emoting in front of green screens is only one component in a very sophisticated visual scheme), Beowulf producer and co-screenwriter Roger Avary has sent along a statement. And as much as I defer to Roger’s authority, I can’t say I’m with him 100%. 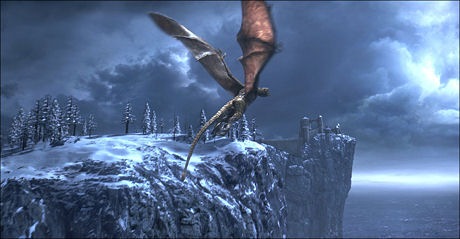 “The thing about Beowulf is that it’s a hybrid,” he begins. “It’s both live action and animation, and we’re going to be seeing much more blurring between the mediums in the future. Any mixed signals that Lasseter may be receiving are a direct result of his and the Academy’s inability to categorize the direction in which Zemeckis is taking the form.

“There is certainly puppeteering involved in much of Beowulf, but the nuances of performance and motion of the characters entirely belong to the talent. When Hrothgar lifts his head, moves his eyes, and twitches his lips — it’s Anthony Hopkins making those choices.

“Lasseter, who is a master filmmaker, shouldn’t allow himself to feel threatened by the future. Perhaps he’s insecure and feels that his films can’t hold their own against live action films in a single, merged ‘Best Film’ category that is inclusive of all movies, regardless of the techniques involved in bringing their stories to life. As an Academy member, this is what I’d like to see.

“To segregate animation in this day and age to its own separate award category is to ghettoize it. But then, maybe that’s what Lasseter wants. Maybe he feels that a smaller field will increase his potential to reach a goal. We’re not intimidated like that.”

Avary is 100% correct in calling Beowulf a hybrid, but it is certainly much, much closer to animation that it is to realism. It presents a computer-composed magical realm (demons, monsters and flying dragons galore) from start to finish except for the live-actor performance element. The eye tells you over and over in a thousand different ways that Beowulf is presenting a lavishly reconstructed realm with today’s animation tools. 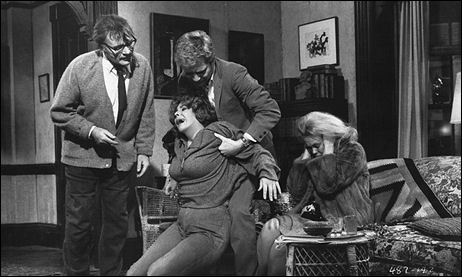 It is therefore not naturalism, and never will be. Which means it can never, ever be considered in the same light as Four Months, Three Weeks & 2 Days or No Country for Old Men or any other film that uses stark, unadorned, relatively untreated images to portray an aspect of life that most of recognize as the way it is out there when you go for groceries or drop by 24 Hour Fitness or pick up caulking at Home Depot — ghost-free, faun-free, dragon-free. Beowulf is animated, animated, animated.

Maybe the Academy should split the Best Animated Feature Oscar — giving one each year to hybird marvels like Beowulf that use human actors and one to old-school gems like Ratatouille? In the old days they used to hand out separate Best Cinematography Oscars — one for color, one for black-and-white. (The final black-and-white Oscar went to Haskell Wexler for Who’s Afraid of Virginia Woolf in ’66.) Why not a Best Hybrid Animated Feature Oscar along with the traditional one? Where would be the harm?