Bardem and the stun-gun syndrome

A critic friend who recently saw Mike Newell‘s Love in the Time of Cholera (New Line, 11.16) said that in the wake of No Country for Old Men that it was difficult to fully accept Javier Bardem as Florentino Ariza, a romantic-minded guy who’s conflicted but more or less normal. The critic said he had a hard time blocking memories of Anton Chigurh. Ariza is about sadness and unrequited love, but the critic couldn’t stop thinking about that gas-powered stun-gun. 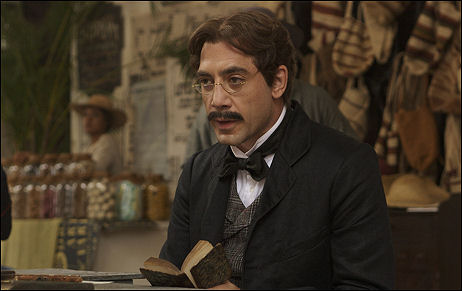 I’m sure this is temporary, but what other actors have been so indelible in a certain role that critics and audiences have had trouble buying them as anyone else?

I’ve been hoping to avoid seeing Love in the Time of Cholera. A little voice has been telling me I’m going to hate it. (The critic didn’t care for it much.) But it’s the closing-night screening at the AFI Film Fest tomorrow night. It’ll be derelict of me not to see it. I need to grim up and get it done.