In a capsule review, Time critic Richard Corliss — usually a fairly adventurous sort and certainly no rigid conservative — has slammed Paul Thomas Anderson‘s There Will Be Blood (Paramount Vantage, 12.26), using terms like “daft” and “deranged zone.” No worries — it’s a solvable issue. Corliss has to see it a second time, is all. 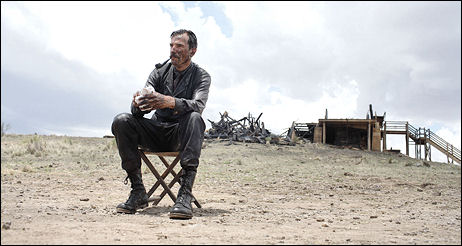 After my first Blood screening, I knew it was masterful but I felt traumatized, appalled, thrown off. The second time I saw it for what it was — a diseased but riveting American epic without an ounce of fat or pretense — and the matter of my initial emotional response went by the wayside.

“Ambition can drive a man to greatness or drive him to destruction, or do both,” Corliss begins. “That was the theme of many novels of the early 20th century. One, Upton Sinclair‘s “Oil”, is the inspiration for this inward, wayward epic that spans 30 years of a tycoon’s career. Daniel Plainview (Daniel Day-Lewis, parading surface charm over a black heart) builds an oil empire on his tenacity, his ruthlessness and his seeming saving grace: a devotion to his son (Dillon Freasier), whom he totes from job to job.

“Anderson’s previous movies (Hard Eight, Boogie Nights, Magnolia, Punch Drunk Love) all teemed with vigorous eccentrics muscling themselves onto the screen. This film is stern, unaccommodating and, finally, daft. It’s of a mind with its antihero, who says, ‘I don’t care to explain myself.’ By the end, when Daniel faces off with a longtime preacher rival (Paul Dano), the movie has retreated into its own deranged zone, to which even sympathetic viewers are forbidden.”