In Denzel Washington‘s The Great Debaters (Weinstein Co., 12.25), a primarily true period story (set in 1935) about student debaters from the African-American Wiley College in Texas having a climactic match with debaters from Harvard University, the 17 year-old Denzel Whitaker plays James Farmer, the renowned founder of CORE and civil-rights leader who was one of the Wiley debaters. 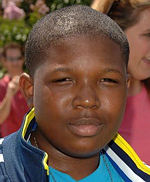 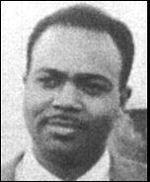 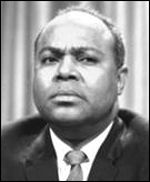 Listen to this recording of Farmer, and you can sense his debating skills quite readily. He was only 15 when the Great Debaters story occured, but had a deep James Earl Jones-type voice and an elegant vocabulary as an adult — qualities he presumably had the beginnings of as a youth. Whitaker (no relation to costar Forest Whitaker) has a thinner, far-from-stentorian voice. Farmer stood well over six feet (which he would have also been in ’35, as most 15 year-olds have reached adult height), but Whitaker stands only 5′ 6″. And Whitaker doesn’t resemble the youthful Farmer at all — he looks more like an adolescent Muhammad Ali.

The likable and appealing Whitaker plays Farmer as well as he can, which is to say satisfactorily. I’m not putting him down, and this is not a forecast of a Great Debaters review. But given the qualities of the Real McCoy, it’s hard not to wonder why Washington cast Whitaker in the first place. The result is a bit like watching Chris Rock portray Paul Robeson. 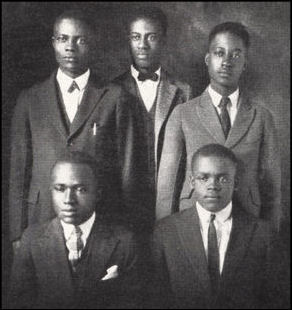 The real “great debaters” — professor Melvin B. Tollson (played by Denzel Washington in the film) stands in the center.