Variety‘s Dave McNary wrote this morning about screenwriter Larry Karaszewski (The People Vs. Larry Flynt, Ed Wood) having “made a major fashion statement” outside Paramount Studios with a red T-shirt emblazoned with a reprint of a recent LA Times story headlined: “Viacom profit shoots up 80%.” 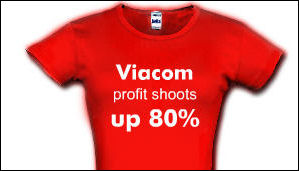 Fine, very clever, typical Karaszewski move . But why didn’t McNary’s story have a photo of Karaszewski’s actual T-shirt (i.e., with Karaszewksi wearing it) instead of a fake Photoshop simulation, and a simulation of a female T-shirt at that? If Karaszewski writes or calls, I’ll meet him tomorrow (or whenever) down at the Paramount gate with my camera and I’ll show Dave McNary how it’s done.

November 6, 2007by Jeffrey Wells25 Comments
« Previous post
“Atonement”‘s burden has been lifted
Next post »
Nobody cares about Roberts’ beef