There’s one film I’ve seen that will, I believe, benefit from a general hunger out there for positivism and bliss vibes, and that’s Marc Forster‘s The Kite Runner. It’s the one Middle Eastern-based film that creates a sense of intimacy, kinship and bonding with Middle Eastern (i.e., Afghan) characters, which is something that I suspect most viewers want to experience, even if they don’t know it yet. 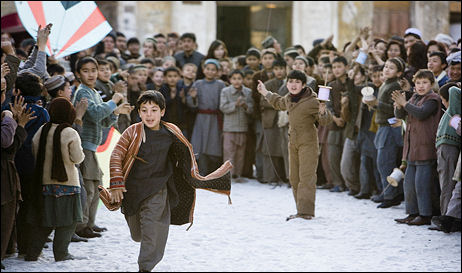 And I’m including in this equation the “leave us alone”-ers (i.e., the donkeys who are refusing to see any film tethered to the current Middle-East situation). Because The Kite Runner is a soother, not an agitator. It’s about guilt and looking for atonement, but it finally offers peace and comfort.

All the other “sand” movies are treating Middle-Easterners as threatening or faceless figures enmeshed in terrible tragedy, which makes them seem almost like banshees, swirling around our diminished sense of morality and taunting us for our wrongheadedness in going to Iraq in the first place. But The Kite Runner invites us to share universal feelings — guilt over past misdeeds, the longing to put things right — through the experience of an Afganistan-born writer (Khalid Abdalla), and therefore builds bridges by reminding us that we’re all brothers and sisters under the skin.

I saw The Kite Runner with a small group of Academy members four or five weeks ago, and I felt this glowing vibe in the room as the lights came up. I don’t happen to feel that The Kite Runner is as good a film as many of the dark dramas listed in the above item. I respect it and admire it as far as it goes, but it’s more of a 7.5 or an 8 out of 10. But feeling is believing, and that “glow” vibe often leads to good buzz and Oscar noms and all the rest of it.