I spoke to famed producer-screenwriter Larry Karaszewski (1408, Ed Wood, The People vs. Larry Flynt) and Juno screenwriter Diablo Cody (a.k.a. “the new Tarantino”) during my early afternoon visit to the Paramount Bronson gate entrance. They and maybe 25 other picketers were doing what they could to visualize and perhaps energize the Writers Guild’s resistance to the greed and bluster shown so far by the studios and the producers. 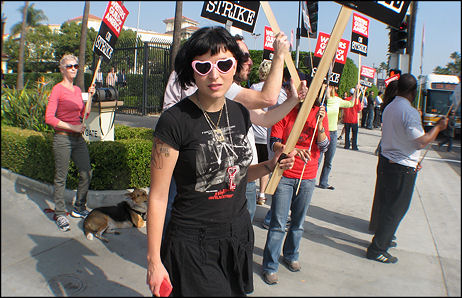 Neither had much to say about the WGAW goals except to repeat what everyone understands (or at least has heard or read), which is that writers aren’t looking for a whole lot — just a fair percentage of new-media pie, and to redress the lopsided terms of the 1988 agreement. (“Why are picketing by the gate? Because we got screwed in ’88”) And they didn’t say much about the major studios’ reported decision to suspend several long-term deals with TV production companies. “They’re just cutting overhead,” Karaszewks remarked.

“During the ’88 strike, there were a lot of writers fighting among themselves,” he added. “it sounds like a cliche but there’s a feeling today that we’re very together on this one, and very justified.”

It’s awesome to stand with the strikers and just listen to those obnoxious car honkers driving by on Melrose. Every third or fourth car was just leaning on it and making a huge racket. It was so noisy it was hard to talk, but the energy felt good. Average Joes definitely seem to be with the writers. If the producers were to try and drum up sympathy for their side of the argument by chanting and holding signs in the same spot, drivers would most likely go “booo!” and given them the finger or the thumbs-down. 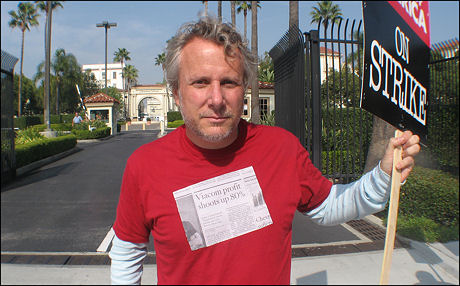 I apologized to Cody for missing a Juno two-for-one interview session six or seven weeks ago (during the Toronto Film Festival) with herself and director Jason Reitman. She said she was in a slightly awkward position because she’s still promoting to promote Juno (i.e., helping the enemy make money), but that she’d gotten permission from the WGAW to do so. This is what all writers with movies coming out soon are doing — i.e., making sure it’s cool to talk to the press.

Cody was definitely the coolest-dressed picketer of all. Lots of black set off by red and pink — a Nightmare on Elm Street T-shirt and black skirt and boots, red socks with red tassles, a red-and-green leg tattoo, a red “key” pendant hanging from her neck, a reddish-pink phone, pink heart-shaped glasses, and shortish jet-black hair. 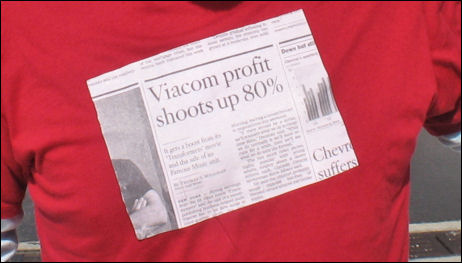