I respect Shia Lebouf‘s on-screen energy, but I haven’t been a huge fan. There was no choice but to feel badly about his Transformers performance, and with his casting in Indiana Jones and the Kingdom of the Crystal Skull he became known as Steven Spielberg‘s little protege. He has seemed too young, too obsequious, too eager to please his elders. All is forgiven, however, in the wake of his Chicago Walgreens bust a day and a half ago. 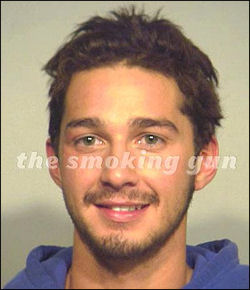 It’s obviously not a good or admirable thing to get drunk and then arrested, but Lebouf has at least removed the goody two-shoes stamp from his persona. Break open the bubbly — he’s gotten in touch with his inner Marlon Brando. He’s proved to the world he can be a rude lout who insults Walgreen security guards if he’s pissed off enough. He has come to not only understand but embody Tom Petty‘s “I Won’t Back Down” when some guy with a badge says, “I’m sorry, sir, but you’re going to have to leave the premises.”

All hail the flawed, vulnerable regular guy he’s now become. No longer that smiling, well-behaved kid and no longer a beaming Spielberg puppet holding the space helmet on the cover of Vanity Fair. An hombre, a descendant of Neal Cassady…a guy you want on your side in a bar fight.