I’ve been trying to get it up for a Lions for Lambs review for several days now, and it just wouldn’t happen. The truth is that I don’t like three second-tier things about Robert Redford‘s new film — the photography, the Aghanistan mountain-range combat sequence, and the use of generic title cards — and I was trying to articulate what I feel about the first-tier aspects so as not to seem trivial. But sometimes the trivial things aren’t trivial but proverbial “blades of grass.” 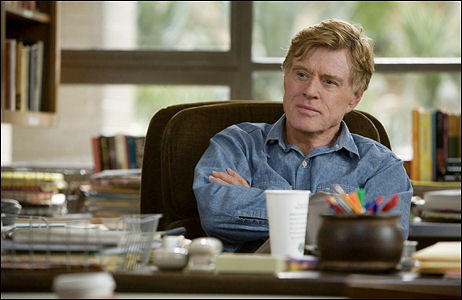 The truth is that I admire Redford’s audacity in having made such a starkly didactic film. You can’t not call it ballsy, although it’s hard not to call Lions for Lambs generally underwhelming. This is a film, after all, that is shorn of tension and visual fluidity in the service of educational “talk”. It is marginally involving, but never once alarming. much less gripping. Everyone had to know that the chances of such a film dropping dead on its opening weekend were pretty high, even with Redford, Tom Cruise and Meryl Streep topping the cast.

The subject, as Redford’s college professor character puts it, is that “Rome is burning.” For 88 minutes the film cuts back and forth between three illustrations of this situation. One, journalists not rigorously questioning the right-wing propaganda about the manifest destiny that is driving the war on terrorism. Two, college kids not giving a shit about the enveloping tragedy of that conflict. And three, the certainty that soldiers trying to fight it out in Afghanistan are going to die in order to validate some vague neocon dream of victory.

I certainly don’t disagree with what it’s saying, and I didn’t hate watching it. But I was irritated by three things.

One, Philippe Rousselot‘s photography is so flat, drab and lacking in visual intrigue during the scene between Redford and Andrew Garfield that it borders on irritating. It’s so lacking in invention that it becomes hard to concentrate on what’s being said. If I were Redford I would have either made Lions for Lambs super-attractive by shooting it the way Vittorio Storaro shot Reds or The Sheltering Sky (which would obviously remove the visual irritation factor, which would allow the viewer to pay closer attention) or I would have taken the super-raw, no-frills approach that Oleg Mutu chose for 4 Months, 3 Weeks & 2 Days. 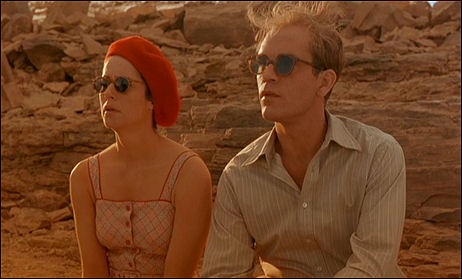 Two (and here comes the SLIGHT SPOILER! ), it’s hard to believe that a solder could fall from a helicopter onto rocky, snow-covered terrain on top of a mountain and just get slightly banged up. (Production designer Anton Furst killed himself by jumping off the top of a five-story parking structure.) It’s harder to believe that the fallen soldier’s best friend in the chopper, having seen him tumble out, would simply jump out of the chopper himself and hope for the best. The only way we could buy this would be if Redford showed us that the chopper is hovering, say, 20 or 30 feet above the mountain peak, but he doesn’t. On top of which enemy Afghan soldiers are shown approaching the position of these two soldiers from less than a hundred feet away, and for no discernable reason they take an awfully long time — a good half-hour — to attack.

Three, white titles explaining anything are bad enough, but there is no reason to call the university where Redford’s professor teaches a generic “California university” — it matters to absolutely no one if the school is in California or Rhode Island or Oregon or Wisconsin. And we certainly don’t care if we know the name of Redford’s character. It sounds like a small-ass thing to gripe about, but the second those titles flashed on-screen I tuned out and stayed that way for two or three minutes…until tuning out again because of Rousselot’s photography. Why create road blocks that do nothing except get in the way?

All that said, here’s a rave review from the New York Press‘s Armond White. 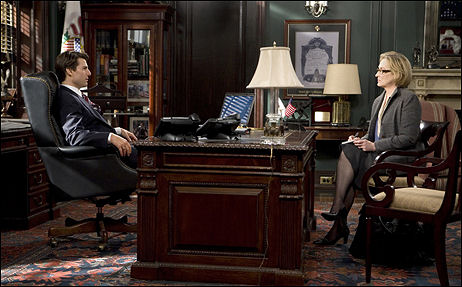