O’Neil, Hammond on “No Country”

Although he’s now allowing that No Country for Old Men will probably eke its way into one of the five Best Picture slots, The Envelope‘s Tom O’Neil is reporting, based on five or so conversations, that the widely-admired Coen brothers film is eliciting respect but not a lot of great passion among Academy fudgeballs. 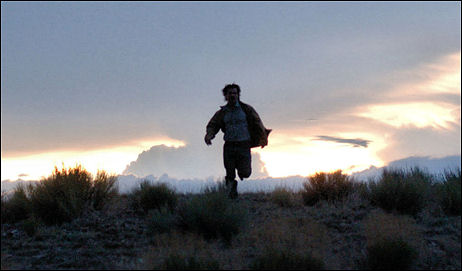 O’Neil speaks here to Envelope columnist Pete Hammond about No Country‘s lofty rep among critics, and how this will most likely translate into Academy-level support. Unless, that is, the softies dig in their heels and “just say no,” either directly or passive-aggressively.

O’Neil himself isn’t a great No Country admirer (he admits this), but if you know Tom you know he isn’t really speaking about quality judgment as much as the proverbial “longing for comfort” factor. We all understand, I think, why O’Neil and his Academy chums are cool to this landmark film, and it starts, oddly enough, with what N.Y. Press critic Armond White called it — “a crime movie for a world at war.”

In saying this White is rehashing an old truism, which is that all great films reflect the world in which they were made as much as the literary source material that they’re based upon. A-level artists are always responding to the electric here-and- now, and the Coen brothers were certainly in this groove when they shot and cut this film in ’06 and early ’07.

No County for Old Men is a period film set in 1980, but it’s saying four dark things about the world of 2007. One, you can’t see what’s coming. Two, you can’t stop what’s coming. Three, the decent people are starting to be outnum- bered by the indecent ones. And four, a kind of spiritual apocalypse is gathering like storm clouds and surrounding our culture.

So there is no comfort for old Academy members in this film, even though it embodies lasting art and immaculate craft. Especially with that “unsatisfying ending” that I’m sure is sticking in their craw — that kitchen-table scene with Tommy Lee Jones lamenting the loss of decency and dependability (as embodied by his father) in his own life, and again admitting to himself and to us that he’s feeling overwhelmed and outflanked by the bad guys.

It’s also interesting that neither Hammond nor O’Neil mention Sidney Lumet‘s Before The Devil Knows Your’e Dead as a Best Picture contender. They apparently feel it’s out of the running — when did that happen? Hammond feels, however that Sidney Lumetis in contention for Best Director. How do you say “yes” to a director but “no” to his/her film?

The leading feel-good comfort providers, according to these two, are The Kite Runner, The Diving Bell and the Butterfly and, in O’Neil’s words, “even” Atonement.