I chose to attend Sunday night’s No Country for Old Men premiere and after-party rather than attend the Mighty Heart screening and Angelina Jolie q & a that happened at the same time at Paramount studios. I wish I could’ve done both because I respect Jolie’s performance as Mariane Pearl, the widow of murdered Wall Street Journal reporter Daniel Pearl, and would have liked to take it in again. 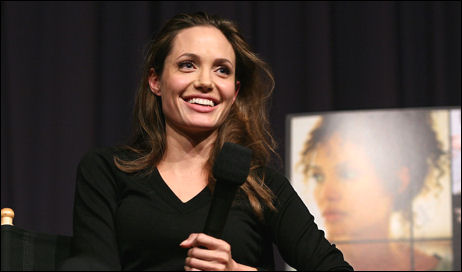 Roughly 450 people attended, according to a Paramount publicist who wrote me about it yesterday. The q & a between Jolie and Maxim critic and Envelope columnist Pete Hammond ended with a standing ovation. Angelina joined the after-reception and did the old schmooze-around.

Hammond handled the questions in his usual smooth way, she said. And yet Hammond told me later on he briefly had one of those mild freakouts that everyone has from time to time when interviewing a celebrity in front of a big crowd when you “go up” the way actors do when they forget their lines. These things happen to the best of ’em. I’ve been there. You’re trying to listen to what the actor or actress is saying, and at the same time unable to figure your next question. 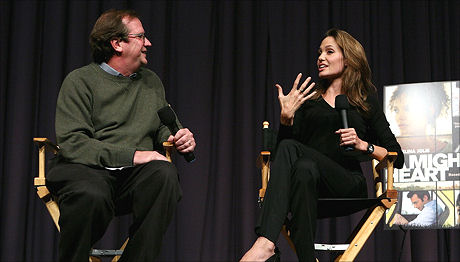 The discussion was on the candid side. Jolie was “emotional and sometime teary-eyed as she shared details of her relationship with Mariane and the pressure of all those involved with the film that the movie tried to honor,” the publicist wrote. “She spoke of the improvisational-style on the set and shared that the climatic, emotional scene in which Mariane hears of DanielÃ¢â‚¬â„¢s fate was the first take and all the actors were crying as it happened.”