Right off the top and without thinking too much, here are some gut-response standouts among the 2008 Sundance Film Festival selections. The dramatic competition, world cinema, world cinema docs and domestic docs were posted at 1 pm today by Variety‘s Todd McCarthy. Premiere selections will be released tomorrow. 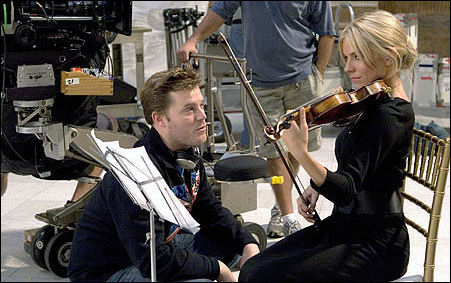 Rawson Marshall Thurber, Sienna Miller on the set of The Mysteries of Pittsburgh.

As usual, one looks for catchy or provocative subject matter, a proven director, veteran actors…anything that pops through among the Sundance grim-itude. You certainly need to be on the lookout for any film that appears to use chronic downerism as a badge of artistic sincerity or authority. Road movies, marginal lifestyles, bizarre dysfunctional behavior, warring family units, shattered dreams, sex with the wrong people for the wrong reasons, etc. Sundance spelled backwards = funky depression.

Geoff Haley‘s The Last Word, an “irreverent romantic comedy centering on a reclusive writer-for-hire of suicide notes,” sounds like a downer case in point. Winona Ryder, Wes Bentley and Ray Romano costar in this ThinkFilm release…yipes!

Any movie costarring the free-spirited Sam Rockwell needs to be approached with caution, I feel. I’m just saying “watch it”…nothing more. The film in question is Clark Gregg‘s Choke — a “raw mother-son comedy with Rockwell, Anjelica Huston and Kelly Macdonald, based on a novel by Chuck Palahniuk (Fight Club).

The Mysteries of Pittsburgh, directed and written by Rawson Marshall Thurber (Dodgeball) and starring Jon Foster, Peter Sarsgaard, Sienna Miller, Mena Suvari and Nick Nolte, sounds decent. I say this having read the book by Michael Chabon, which is about sexual exploration (a euphemism for anything gay) and a “tense” father-son relationship. Beware of any director who uses three names as it connotes pretentiousness.

Daniel Barnz‘s Phoebe in Wonderland, an “unusual coming-of-age tale” about a girl (Elle Fanning) who takes her dysfunctional family (some of whom may be played by Felicity Huffman, Patricia Clarkson, Bill Pullman and Campbell Scott) on an unexpected journey…God, another road movie?

A sense of uncertainty pervades the synopsis of Jonathan Levine‘s The Wackness — great title! — about a teen drug dealer (Josh Peck) who falls for the daughter of his drug-taking shrink (Ben Kingsley). With Famke Janssen, Olivia Thirlby, Mary Kate Olsen and Method Man.

Among the docs, the social realism standout appears to be Nanette Burstein‘s American Teen, an “irreverent, frank account of four Indiana high school seniors.” It seems general enough in its subject and focus to have possibly lucked into something.

A celebrity portrait doc seemingly guaranteed to deliver a funny, stimulating time is Alex Gibney‘s Gonzo: The Life and Work of Dr. Hunter S. Thompson, a “look at the late author’s prime period of 1965-75 via previously unavailable homemovies, audio recordings and unpublished manuscripts.

Which doc will win the Al Gore award for best illuminating a dwindling resource/global contamination issue? Will it be Josh Tickell‘s Fields of Fuel, about a man who takes on “big oil, big government and big soy” as he proselytizes for energy alternatives, or Irena Salina‘s Flow: For Love of Water, about “the possibility that Earth’s supply of this essential liquid is dwindling.”

Docs about terrible histories and present-tense roblems in foreign countries include Lisa F. Jackson‘s The Greatest Silence: Rape in the Congo and Ellen Kuras and Thavisouk Phrasavath‘s Nerakhoon.

The hottest world cinema entry looks to be Jose Padhilla‘s Elite Squad, a Braizlian rime drama that’s been snapped up by the Weinstein Co. — about on a special crime unit’s war against drug dealers in the run-up to the Pope’s visit to Rio. Running a close second is Carlos Moreno‘s Perro Come Perro (Dog Eat Dog), a crime drama about “two hoods who sign their own death warrants when they bungle a job.”

A mildly interesting world doc appears to be Chris Waitt‘s A Complete History of My Sexual Failures, in which the filmmaker “consults the women in his life, past and present, to learn exactly how the opposite sex views him.” In other words, a documentary version of Neil Labute‘s Some Girls witha little Sherman’s March thrown in.

November 28, 2007by Jeffrey Wells15 Comments
« Previous post
Wried passes along same rumor
Next post »
“There Will Be Blood” trailer