I went to last night’s screening of Sweeney Todd (Dreamamount, 11.21) with a guarded attitude. Here we go, another flush of the downward Burton swirl, get ready for it. The man has been in a kind of losing-it mode since Planet of the Apes and he’s had his day…live with it. And then it began, and less than two minutes in I knew it was exceptional and perhaps more than that. 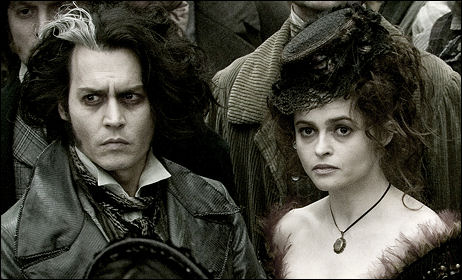 Ten minutes later I was feeling something growing within me. Surprise turned to admiration turned to amazement. I felt filled up, delighted. I couldn’t believe it…a Tim Burton film that reverses the decline! Call me a changed man. Call Burton a changed man. Sweeney Todd is his best film since…Beetlejuice?

I have to leave for LAX and a flight to Boston in less than an hour, but I have to get at least some of this down.

All my life I’ve loved — worshipped — what Stephen Sondheim‘s music can do for the human heart. Blend this with a tragic, grand guignol metaphor about how we’re all caught up with some issue of the past — needing on some level to pay the world back for the hurt and the woundings. Add to this Burton’s exquisite visual panache and precision, the drop-dead beautiful, near monochromatic color, the ravishing production design and…pardon me for sounding like a pushover, but this movie pushes over.

At times it melted me like a candle. I was lifted, moved. I was never not aroused. Every frame is a painting. 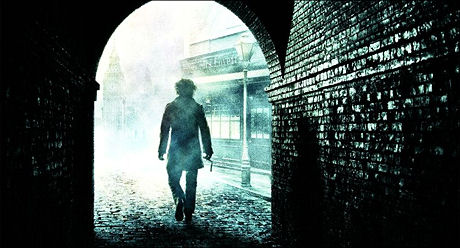 Johnny Depp is fantastic as the Demon Barber of Fleet Street — he has to be a Best Actor candidate as of this moment. It grieves me to admit this, but bully-boy David Poland predicted that Depp’s Todd would be a major contender early last year. Helena Bonham Carter can’t sing very well but she’s great anyway. Alan Rickman, Timothy Spall, Jamie Campbell Bower (a major new arrival), Jayne Wisener, Sascha Baron Cohen…everyone fills the bill.

The Envelope‘s Tom O’Neil has been calling this one for weeks and weeks, and if Sweeney Todd hadn’t been this good he would have egg yolk all over his face this morning. But he listened to the voices and somehow just…knew. Sweeney Todd is a locked Best Picture contender at this stage. It’s too beautifully made, too full of feeling, too exquisitely performed to shunt aside. But it won’t win because of the blood.

I was lifted, touched, moved, melted…and also showered and sprayed. And I’m sorry for this. If only Burton had held back and focused harder on the metaphor of a man consumed by bitterness, determined to pay back those who ruined his life…if he’d only elected to turn away and not indulge his B-movie director’s fetish for the gushing red vino, as if from a garden hose or a fire hydrant. The film is its own tragedy, in a way. So near and yet so far. 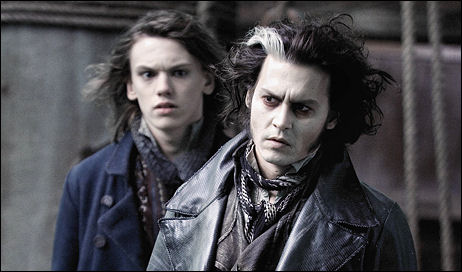 Something very deep-down kicks in when a human being is killed or mutilated or both. It’s horrible and ghastly, and the spirit naturally recoils unless — and this is a very big “unless” — the style and the context turn it around and redefine it in some way.

Al I know for sure is that I was mesmerized. I loved the duets, the look of it, the control, the poise, the ache, the tragedy. This is a major, major film. Way up there. Better, impact-wise than the B’way stage version I saw a couple of years ago with Patti Lupone. The finest big-time movie musical since the under-appreciated Evita, which I feel is Alan Parker‘s best film ever.

So into the top-five slot it goes and let the back-and-forth begin. It almost certainly won’t win the Best Picture Oscar because Burton, intractable mule that he is, allows a gore fetish to override the emotion and the metaphor and the beauty. Okay, perhaps not “override” but he gives too much exposure and power to the plasma. But this is still a masterful work. Heart-stopping, heart-lifting. I came close to tears several times, and I don’t like admitting this stuff because people use it against you later on. 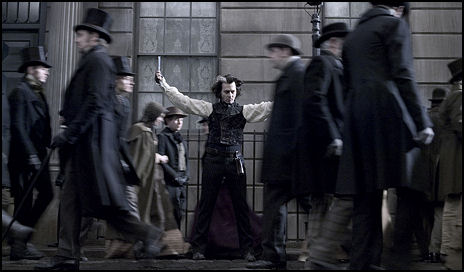