Variety critic Robert Koehler has fired back about my having characterized the L.A. Film Critics Association as being “contrarian and damn-the-torpedos in giving their Best Picture award to Paul Thomas Anderson‘s There Will Be Blood — a brilliant, lacerating, suffer-no-softies art film that you need to see twice to get the full benefit of.”

“I’ve cited to both Anne Thompson and David Poland the various fictions they’ve written about re. LAFCA’s awards,” Koehler begins, “namely that our pick for TWBB had to do with going against National Board of Review (Anne) or the Academy (David). And now you say we were generally flying the contrarian flag.

“Again, this fiction that LAFCA is going against something. To be ‘contrarian’ means that there is some accepted norm or standard or position, and that the contrarian operates counter to that position or line. But at the very start of the awards season, when our group convenes at 10 am Sunday with no clue as to who else has voted on what, and with utterly no memory (or care in the world) as to whatever NBR went for (the only title sticking in the mind being possibly The Bucket List), there is simply no contrarian stance at play, because there’s nothing to stand against — because we’re at the start of the awards season.”

Wells mid-point reply to Koehler: You and your LAFCA brethren knew very well at the start of voting that There Will be Blood is not an easy sit. It’s brilliant and piercing, but it leaves you with a kind of beat-up or staggered feeling. A woman friend I saw it with was groaning in her seat — she hated it. I know at least one movie guy who came out of a screening feeling a little stunned and saying “what was that?” I presume you know about this. You’re too sharp not to. It’s not a deep dark secret.

To me, the greatness of Paul Thomas Anderson‘s film, which I’ve described as “diseased,” was not immediately apparent. It’s about as far as you can get from a comfort-blanket movie. Especially with that full-throttle bowling-alley scene at the end. Surely you realize that Academy soft-bellies are going to contort themselves into pretzel shapes when it comes to nominating it for Best Picture, if they do. So you guys knew darn well you were going against the grain of that comfort-seeking mindset.

Back to Koehler’s lettter, which he concluded by saying that “you folks need to step back and take a breath, and reconsider these fictions you’re creating out of thin air. By a wide margin, LAFCA felt by a wide margin that There Will Be Blood was the best American film of the year. That’s all. No chess work, no calculations, no triangulation — nothing but a matter of taste based on seeing more movies over the year than anybody else.

“And Jeff, the group judgement was based — with perhaps no exceptions, since there was simply no time for most or all of us to view it more than once — on a single viewing of TWBB. It’s a great movie on the first viewing. I have no idea what you’re talking about [when you say it needs to be seen twice].”

Rex Reed talking to Dick Cavett 37 years ago about the forthcoming 1970 Oscar awards (covering 1969 films). Reed was fairly cynical, of course, but what strikes me is how familiar his complaints sound. The game, the attitude and the dance steps never change.

An anonymous New York Film Critics Circle source has passed along notes about this morning’s voting: “There was nothing too exciting this time. Rex Reed made a vomiting noise the first time there was a vote for Francis Coppola‘s Youth Without Youth, which prompted NYFCC chief Stephen Whitty to quip, ‘And a special award to Rex for sitting through it.’ N.Y. Press critic Armond White gave a passionate speech arguing against the proposed Lifetime Achievement Award for director Sidney Lumet (Before The Devil Knows You’re Dead) on the grounds that Lumet sucks and always has, but that’s about it. Oh, and there was a good protest vote for Best Actress with Bianca the doll (from Lars and the Real Girl) being pushed over Julie Christie.”

“Hal Holbrook is the only lock for an Oscar win. Marion Cotillard seems nearly as certain. Sidney Lumet has an excellent chance, certainly at a Best Director nomination. Everything else is going to waffle until game time.” — e-mail from a working DGA member, written today.

“Reports of strange deaths begin to come in from cities around the world. It’s only after the main characters — Mark Wahlberg, Zooey Deschanel — begin their trek out of Philadelphia do they begin to realize the scope of the death toll. People everywhere are succumbing to an urge to kill themselves. [It soon becomes clear] that the deaths have been caused by the release of a toxin by surrounding plant life in an evolutionary last-ditch attempt to protect themselves from the predator that endangers them the most.” — from a 1.7.07 online script review by Rich Drees. 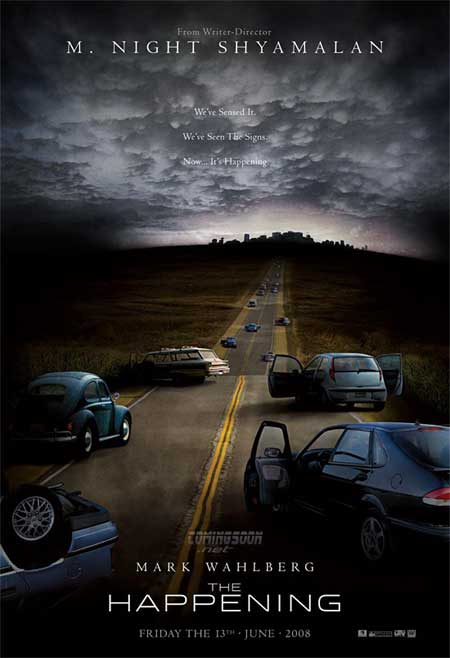 12:51 pm update: No Country for Old Men has won the New York Film Critics Circle award for Best Picture. It seemed to take a little while, indicating that perhaps a second ballot was needed for Coen Bros. advocates to win over a tough challenger. I’d sure love to know the backstory, if there’s one to tell.

Tom O’Neil and I may have called it last night. By choosing There Will be Blood for Best Picture yesterday, the L.A. Film Critics enabled the NYFCC — gave them the freedom of will, unbothered and unencumbered by that pesky National Board of Review precedent or any concerns about being seen as rubber-stamping another critic group’s choice — to select No Country for Old Men without any nagging whatevers.

12:37 pm, Boston time: The New York Film Critics Circle has been voting for a while now, and…oh Christ, Amy Ryan has won a Best Supporting Actress award again? What is that, five so far? This is turning into a bit of a pack mentality thing. What has I’m Not There‘s Cate Blanchett done to offend? Cheers for the year’s greatest drugged-out, child-destroying deadbeat mom, whom Ryan has been expert in bringing to life.

4 Months, 3 Weeks & 2 Days has been blown off because the NYFCC, strangely, has decided to give their Best Foreign Film award to Florian Henckel von Donnnersmarck‘s The Lives of Others, an exquisite film that everyone regarded as an ’06 release (regardless of the New York-area distribution particulars) and which won, of course, the Best Foreign Language Feature Oscar last February.

The NYFC’s Best Animated Film is Persepolis. The Best First Film award went to Away From Her director Sarah Polley. No End in Sight has won the Best Documentary award, and There Will Be Blood‘s Robert Elswit has been named Best Cinematographer.

29 Comments
Uncle Festus and the Kingdom of the Crystal Skull

USA Today‘s Anthony Breznican has posted some plot details from Uncle Festus and the Kingdom of the Crystal Skull, as passed along by producer Frank Marshall. The stand-out thing is the huge, caramel-tinted skull and those massive chompers, which appear to be in perfect condition. 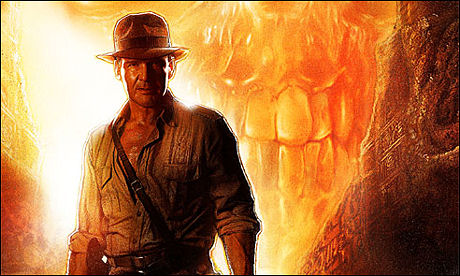 Sadness and regret over the sudden deaths of Red Wagon production vp Rhiannon Meyer and Scott Rudin Prods. vp Sam Cassell, both 28, early Saturday morning. Variety‘s Michael Fleming reports they were on their way home from a late dinner around 1 ayem when an inebriated Jose Luis Vargas slammed into their Honda Civic at the corner of Sunset and Gower.

“It’s funny that the most hopeful, great movie of 2007 (based on the memoir by Jean-Dominique Bauby) centers on a man (played by Mathieu Amalric) whose massive stroke leaves everything paralyzed except one eye,” notes New York critic David Edelstein in a 2007 wrap-up piece. “But his mind is unfettered, and so is the palette of Julian Schnabel — who turns out to be a major filmmaker, an artist whose grasp of light and texture and camera movement is both visually inspired and fused with the characters’ emotions. Somehow, the hero’s plight becomes a metaphor for the human condition: It reminds us how submerged we all are, how distant from even the people we love.”

Yup, an excellent film. Schnabel is a major-league visualist who took an unappealing solitary-confinement situation and made it into something gloriously imaginative, transcendent and universal. Why, then, was I praying for this impassioned film, beautifully made as it was, to end as quickly as possible? Why couldn’t I submit to the metaphor and identify with a totally paralyzed man and go with the notion that we’re all blinking our eyelashes (if only we could do more!) in order to convey our innermost whatever?

Because I’m not paralyzed, dammit, and I’d rather not be, not even by cinematic proxy. Because, thank fortune or fate or whatever or whomever, I’m alive and healthy and able to say and do, write and create, debate and engage…far from oblivion and delighted not to be bed-ridden or imprisoned or ruined in some godawful way, thank you. And not very interested in being a prisoner of any kind (even briefly) until I have no choice in the matter. No bars on my windows, no way and no how. 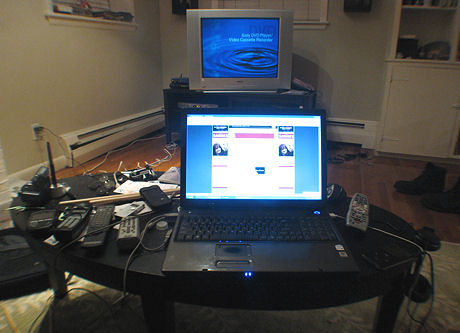 Here’s hoping that something “happens” during today’s New York Film Critics Circle voting. Something along the lines of what was reported last year by Bilge Ebiri — Rex Reed‘s despair over United 93 being chosen Best Picture, the Andrew Sarris bathroom break…anything like that. If Ebiri doesn’t report something (or even if he attempts a repeat of last year’s scoop), this is an open invitation to any NYFCC member to get in touch and pass along something “good” about how the voting went down (i.e., what internecine tensions brought about what vote for what actor or film) or about some unintentionally revealing admission of some political motive or core prejudice during the voting.

The political and internecine nature of the recent critics awards (plus the National Board of Review awards last Wednesday) was discussed by The Envelope‘s Tom O’Neil and myself during a podcast recording last night.

In his description of our chat, O’Neil writes that “you’ll hear us laughing over the possibility that the New Yorker critics may now feel free to pick No Country on Monday since the Hollywooders didn’t do so on Sunday (the two groups admit that they try to avoid rubber-stamping each other). But if No Country fares poorly in the NYFCC voting, then…award pundits are just wrong about how the typical critic feels about that Coen brothers pic.”

I don’t agree on this point. AMPAS, HFPA and guild-wise, No Country for Old Men is a more palatable, kind-hearted and less abrasive experience than There Will Be Blood. Add this to its Best Picture critics tally so far and the Coen Bros. pic enjoys a close-to-frontrunner status right now, which is a better place to be than being a flat-out frontrunner, which nobody wants to be until early January.

I asked O’Neil what had happened to Sidney Lumet‘s Before The Devil Knows You’re Dead, as it seems to have dropped off radar screens. One reason, he said, was that it wasn’t being promoted as heavily as it needed to be by ThinkFilm. Today’s New York Film Critics Circle voting, he said, is a last-chance, do-or-die situation for the Lumet film. If it’s chosen as Best Picture or one of its actors takes an award, fine…back in the game. But if nothing happens, it’ll be adios amigos and “that’s all she wrote.”