Boston Globe critics Ty Burr and Wesley Morris do a video assessment of Jason Reitman‘s Juno…without once mentioning the name “Jason Reitman.” Burr predicts that star Ellen Page and screenwriter Diablo Cody will be nominated for Best Actress and Best Original Screenplay, respectively…which no one disagrees with. 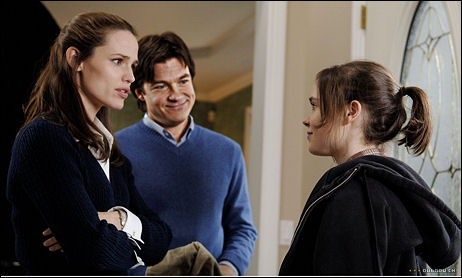 One of them repeats, however, the pretty-much-dismissed notion that this smart and likable pregnancy dramedy is this year’s Little Miss Sunshine. It’s not — it’s this year’s Juno. Which is fine as far as it goes. I was okay with Juno. I admired and was moved by some of it, but…

The difference is that Little Miss Sunshine is (a) better written (i.e., less arch in the beginning) , (b) has better “money” or payoff scenes (there is no equal in Juno to the Sunshine scene when Paul Dano loses it over realizing he’s color-blind, then calming down when Abigail Breslin gives him a hug) and (c) has a more touching and universal theme (this or that family member may be nuts or struggling or a flat-out loser, but the lucky ones will always have kin standing by).