Yesterday afternoon Entertainment Weekly‘s Missy Schwartz posted a chat with director Guillermo del Toro about the possibility of his directing the two Hobbit movies for producer Peter Jackson. Del Toro said he’s “heard some rumblings but nothing official. I don’t want to think about it because it’s such an eventuality.” 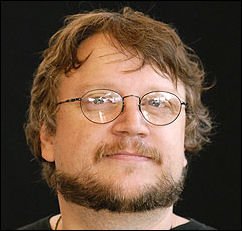 And may it go no further than that. Del Toro is way, way above Jackson’s class — his work has steadily matured, becoming cleaner, richer and more confident, with each new film. Jackson hasn’t advanced a single aesthetic notch since Braindead. He’s about two things and two things only — “look at what I can do!” and “wheeee!” He’d only cramp Del Toro’s vision and style.
The Hobbit “is the only Tolkien book I read,” Del Toro said. “I tried my best to read Lord of the Rings, the trilogy. I could not. I could not. They were very dense. And then one day, I bought The Hobbit. I read it and I loved it. So it would be a privilege. But listen, I wish I knew. At this stage, after Hellboy II, I’m unemployed!
“I met Peter and Fran [Walsh, Jackson’s life/creative partner] when we were trying to do Halo. I think what they’re doing in New Zealand is amazing. What they√É¬¢√¢‚Äö¬¨√¢‚Äû¬¢re doing, in terms of the way they approach filmmaking — the way I see it is, it’s Hollywood the way God intended it. Because it’s a filmmaker’s dream and a filmmaker’s facility. So it’s heaven. The question is: Will I go to heaven? I have no idea.”
Schwartz says that “the idea of you and Peter Jackson working together is enough to make every geek’s head explode” and Del Toro says, “It would make my head explode! But you know, I think it’s an eventuality. I would love to, but as my agent says, ‘You’re currently unemployed.'”